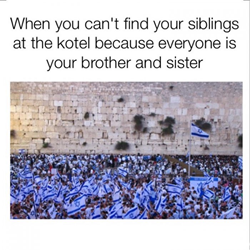 The Adam and Gila Milstein Family Foundation announced the winners of its meme competition after over 110 people on six continents submitted over 300 pro-Israel memes.

Over the course of 14 days, more than 110 people from a dozen countries on six continents submitted over 300 memes, which received over 16,000 votes during the week-long voting period.

The Adam and Gila Milstein Family Foundation today announced the winners of its worldwide competition for the pro-Israel memes. Over the course of 14 days, more than 110 people from a dozen countries on six continents submitted over 300 memes, which received over 16,000 votes during the weeklong voting period.

The winners included several memes that emphasized the love and pride of Jewish people in the Jewish state, such as one showing hundreds of people wrapped in the Israeli flag with the text, “When you can’t find your siblings at the Kotel because everyone is your brother and sister,” and another that shows two women in the IDF Air Force with the caption, “Not every Israeli woman is Gal Gadot, but every Israeli woman is Wonder Woman.”

Others emphasized the antisemitic double standard applied to Israel, such as one that shows the leader of “The Rent is Too Damn High” party with the text, “Tree fell in the forest – no one was around to hear. Still Israel’s damn fault.” Another was a comic of a man saying “I don’t always blame Israel” in the first panel and, “Oh wait, I do” in the second panel.

“This contest was incredibly successful. The images submitted were funny, entertaining and often poignant,” philanthropreneur Adam Milstein said. “I am incredibly proud of all the people who submitted these excellent memes, the thousands of people who took a moment to vote for the best ones and the panel of judges who chose the winners.”

Another winning meme was a variation of an incredibly popular meme showed a tic-tac-toe-like square of eight Jewish non-profit organizations, including the Milstein Family Foundation, with the text in each box saying “Thank you for supporting Jewish students on campus,” with the middle square saying “not you” in red text over an anti-Israel organization.

The contest opened to submissions on Aug. 28, the voting period began Aug. 3 and both submissions and voting closed on Aug. 14. Each participant was allowed to submit up to five memes, and the public voted on memes by clicking Facebook “reacts” — like, love, haha, sad, wow or angry.

The final winners were chosen by a panel of seven college and high school student activists. A total of $2,000 was awarded to the 18 contest winners.

“With all the seriousness of our advocacy, it is important that we have some fun and laughs,” said Dana Benavi, a sophomore at U.C. Davis who is a StandWithUs Emerson Fellow and a sister of Sigma Alpha Epsilon Pi, Jewish sorority. “I follow all of the Israel meme pages on Facebook and I love looking through them. I am excited to bring these memes back to my campus to lighten the mood.”

The Milstein Family Foundation partnered with more than a dozen Jewish and pro-Israel organizations to sponsor the contest. To see all the submitted memes, go to http://www.milsteinmemes.org.

About the Adam and Gila Milstein Family Foundation: The MFF works to safeguard and strengthen the Jewish People and the Jewish State by igniting Jewish pride in the next generation, providing pro-Israel Americans with knowledge and expertise to advocate for the State of Israel, and bolstering the critical U.S.-Israel Alliance. Learn more at http://milsteinff.org/

At a time of growing challenges, “Israeliness” offers the Jewish community...
Scroll to top