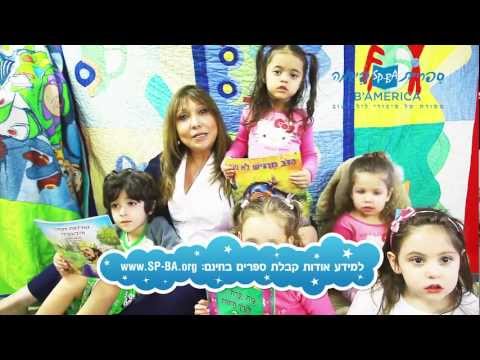 Ahad Ha’am, a great Zionist thinker and icon, knew that one of the keys to creating a thriving Jewish culture in Palestine, and among assimilating Jews in Europe, was reviving the ancient Hebrew language. While Hebrew had been relegated to books of law and philosophy for centuries, Ahad Ha’am and his contemporaries wiped away the dust, and revived the spoken language, creating a modern Hebrew culture.

More than 100 year’s later Hebrew is again at the center of cultural transformation, with a novel program bringing Hebrew into Jewish homes—again.

Can a bunch of free Hebrew children’s books preventing Israelis from disappearing into the melting pot of American culture? A pioneering program is being launched nationwide seeking to do just that.

While America has been a land of opportunity for hundreds of thousands of Israelis, it is also a place for where many lose their connections to the Jewish community. Sifriyat Pijama B’America, or the Pijama Library in America, is seeking to reunite Israelis and Jewish and Israeli-American culture.

The project is the brainchild of Adam and Gila Milstein, leaders in the Israeli American community in Los Angeles. “There are hundreds of thousands of Israeli families nationwide,” said Milstein,  “who are not affiliated.”  And that trend has him very worried about the future of the Israeli Jews in America.

Sifriyat Pijama B’America is a Hebrew language spin-off of a large and popular program called PJ Library, which sends thousands of Jewish-themed books for free into homes. The Hebrew sister project launched in 2011 and within weeks, 2,000 families signed up to receive monthly Hebrew language children’s books that they can read to their children. The program was off to an amazing start. The organizers realized that just sending books was not enough, and looked for ways to make the program even more effective.

It’s estimated that up to 1 million Israelis have immigrated to the United States since 1948. Their children tend to assimilate quickly, attend public schools, and maintain a highly secular Jewish lifestyle. But as Milstein points out, “being secular in America means assimilating and disappearing at a faster rate.”

Sharon Barkan, a Hebrew teacher in Los Angeles, has enjoyed the books and feels it’s an important part of raising her Israeli-American children. “For me words are the strongest thing there is,” said Barkan, “these books are the connection my daughter now has to the Hebrew language.” Reading the books with her kids has been, “a wonderful experience. And the beginning of each book has information and activities that we do with the kids.”

The books chosen seem to resonate with their audience, “My daughter,’ said Barkan, “likes to speak about the characters in the books – they are very compelling.”

Milstein’s main concern are children. “Many families are clearly not affiliated and connecting with Jewish education. And the victims are the kids, because the kids have no connection to Jewish life and Israel. That is why so important to bring into Jewish life and learning to them.”

Registration is now open at 28 schools nationwide and online and can accommodate 6,000 families. The organizers hope that up to 50,000 people will be reached in this current year of the program. When families register, they have two year’s of free books.

The books are chosen by a committee made up of representatives from the Israeli Ministry of Education, early childhood educators and psychologists to promote Jewish values. Each book contains instructions to the parents to help them teach the values that each book promotes. While the books are not religious in nature they contain Jewish themes and characters.

“It is much easier for Israel’s to become unaffiliated from the Jewish community, than maintain a connection,” said Milstein, “but we hope that through Jewish education, getting families active in passing on Jewish values and Hebrew language, that we can create a thriving and connected community of the future.”

I am sure that in heaven Ahad Ha’am is smiling.