Newsroom - AISH: Reaching Israelis in America - Adam Milstein is using Hebrew to stem the tide of assimilation amongst Israelis living in America 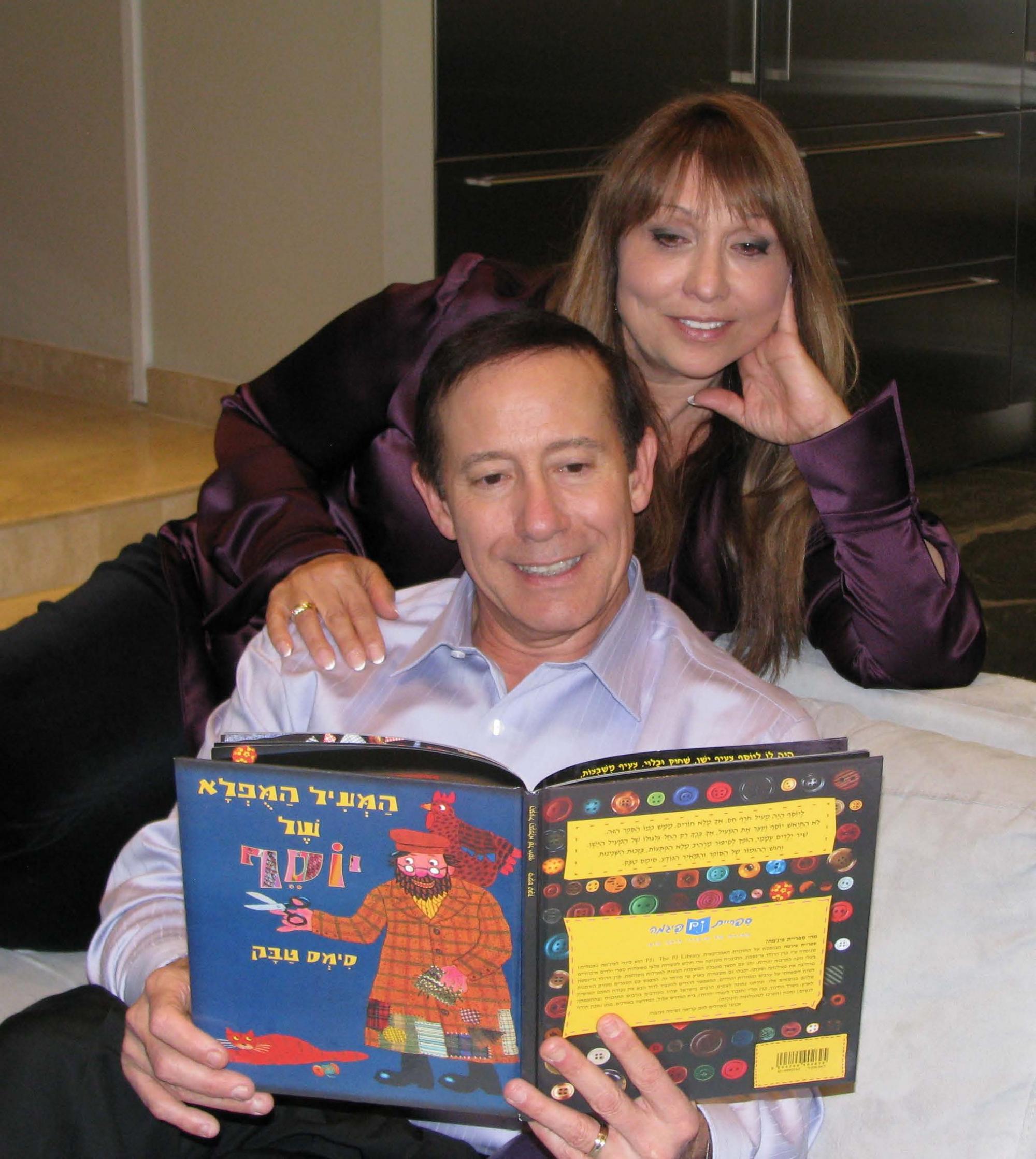 AISH: Reaching Israelis in America – Adam Milstein is using Hebrew to stem the tide of assimilation amongst Israelis living in America

May 26, 2012
Adam and Gila Milstein initially moved to the United States from Israel with their two youngest daughters over 30 years ago. Their plan was to stay for a couple of years to allow Adam to complete his Master’s in Business Administration at the University of Southern California in Los Angeles. When he graduated he started working to pay off his college loans and before they knew it 20 years had passed and they never came back to Israel.

The Milsteins joined what Israelis call the “yerida” or descent (the opposite ofaliyah or ascent – i.e. moving to Israel). Adam ended up going into commercial real estate and after a successful career, he and his wife became involved in philanthropic work to help the State of Israel and the Jewish people.

The Milsteins with one
of their Hebrew books.

Although both their daughters attended Jewish day schools for elementary school, there weren’t many choices when it came to finding a non-denominational Jewish high school. The Milsteins therefore ended up sending their daughters to a secular private school in the Valley. Although they were happy with the education, they were disappointed to notice that most of their daughter’s friends were non-Jewish – although it was to be expected considering that only a small portion of their classmates were Jewish. However, when their daughters started dating non-Jewish boys, the Milsteins began to get uncomfortable.

When Adam told his daughters that they needed to marry Jewish, their response was an emphatic, “Why?”

Adam realized he couldn’t explain to his daughters why they needed to marry Jewish.

“I didn’t have a good answer for them,” he recalled. “They pointed out that I myself lived a totally secular life. Why should they do otherwise?”

Marrying Jewish didn’t fit into their secular values with which they had raised their children up until that point.

Adam realized that it was time to discover why preserving his Jewish heritage was so important to him and his family. He started attending Aish LA events in 2002 and began learning regularly with Aish HaTorah’s Rabbi Dov Heller.

As he learned more about Judaism and his Jewish pride increased, he became more and more aware that assimilation among Israeli-Americans was becoming a major epidemic. There are an estimated 700,000 to 900,000 Israelis living in the United States. Since the majority come from secular families, they often lack the ability to pass on Jewish tradition to their children once outside of the land of Israel. According to Milstein, this results in intermarriage and assimilation rates that are much higher as those of American Jews.

“The parents feel they’re Jewish even though they are completely disconnected from Jewish observance and community simply because they are Israeli,” he explained. “Their kids, on the other hand, don’t want to be Israelis or immigrants. They want to assimilate into American culture and get as far away from their ‘foreign’ roots as possible. American Jews already have an infrastructure to pass Judaism on to their children. Israelis have nothing. They rarely belong to any synagogues because it costs a substantial amount of money to become members. How will their kids stay Jewish? Kids need Jewish life or Jewish education otherwise they will assimilate more rapidly.”

Gila Milstein reads Hebrew books
to her grandson and his friends.

In many parts of Israel these problem exists as well, albeit to a lesser degree. “Kids don’t have the same Jewish connections nowadays,” Milstein continued. “In my time everyone served in the Israeli army and we understood the importance of a Jewish State. Today, an unprecedented portion of Israeli youth in large metropolitan areas such as Tel Aviv tries to avoid the draft.”

Nonetheless, outside of Israel, Israelis are particularly vulnerable to assimilation, unprepared for life in the Diaspora. “Expatriate Israelis keep thinking they are going back to Israel someday,” Milstein explained. “They have to realize that they are here for good. As the saying goes, they’re sitting on their suitcases. They don’t realize that they are actually sitting on a time bomb.”

As part of a solution, the Milsteins founded Sifriyat Pijama B’America (SP-BA). Inspired by PJ Library and its Israeli counterpart Sifriyat Pijama, SP-BA provides an opportunity for young Jewish children living in the United States, ages three to six, to receive quality Jewish storybooks in Hebrew each month – for free.

The program gives young Jewish children living in the US quality Jewish storybooks in Hebrew each month – for free.

Each year, nine children’s books are chosen by the Israel Ministry of Education and a committee of experts in early childhood and Jewish education in addition to a music CD or DVD. The curriculum is composed of popular storybooks by Jewish authors in Israel and the U.S. that teach Jewish values on a universal level – to which children everywhere can relate. Book titles include “Joseph Had a Little Overcoat,” “King Solomon and the Bee,” “Old Hillel’s Patience,” and other classic stories. Messages range from satisfaction with one’s lot, appreciating all of God’s creatures, discovering one’s inner beauty, and overcoming negative impulses. Each book or CD is accompanied by a guide to help parents further engage their children through activities and discussions.

“In a world where everything is TV, I-Pad, and computers, books are more important than ever,” Sharon B., a single Israeli mother living in L.A., said. “Not only are they free, but they are the right books with the right values.” She insists that her children speak Hebrew at home, yet getting Hebrew books was always a challenge. “Hebrew is my language. I don’t want my children to lose their roots. They have to eat, sleep, bathe, and speak Hebrew!” she said. Finding out about SP-BA was welcomed news.

Naomi W. came to the U.S. on vacation 14 years ago, met her husband and stayed. She is thrilled to finally have quality Hebrew books to read with her children – who speak Hebrew to her in the home, even though her husband is American. “They’re classics – books I grew up reading,” she said. “They’re beautiful, cute, and the kids love them!” Although they sent all their children to a Hebrew speaking pre-school, when it came time for elementary school they were unable to afford a Jewish day school. “It’s always a struggle to keep your children connected to Israel and Jewish life,” she recalled. “When our children went on to public school, they lost their Hebrew.”

In addition to fostering a strong Jewish identity and an appreciation for Jewish values and culture among the new generation and encouraging the use of Hebrew as the official language of the Jewish People in Israel and the Diaspora, the mission statement of SP-BA is also to encourage unaffiliated Israeli-American families to get involved in Jewish education.

“We are trying to reach out to Israelis and embrace them and bring them back to Jewish life, Jewish education and the Jewish people.”

“We are trying to reach out to Israelis and embrace them and bring them back to Jewish life, Jewish education and the Jewish people. Otherwise they might be lost completely,” Milstein said. “This process doesn’t just happen through listening to bedtime stories in Hebrew. We hope that once they read the books to their children, it will create an appetite for more Jewish life. What we are truly seeking to do is to build communities with Jewish day schools as their focal point and help Israeli-Americans – especially those who are unaffiliated with Jewish institutions – to connect with Jewish life and Jewish education.”

This year, parents will be invited to enroll in SP-BA for free through a local Jewish day school with the goal of bringing unaffiliated Israeli-Americans who are often not connected to the mainstream Jewish community into the Jewish day school system, thereby strengthening local Jewish communities across the country. By establishing relationships with 30 affiliated Jewish day schools – in Los Angeles, New York, New Jersey, the Bay Area, San Diego, Chicago, Washington DC, Phoenix, Denver, and other cities across the U.S. – families who otherwise haven’t become a part of the local day school community will feel welcome attending Jewish community events in the schools in the future. SP-BA organizes monthly or bi-monthly group reading events, costume parties, and plays to bring participating and new families together and to bring the books to life. Children need not be enrolled in an affiliated school to participate in SP-BA, but the registration events are an important first step in greater involvement in the local Israeli-American and Jewish communities.

In this sense, SP-BA is an amalgamation between the PJ Library — which mails books directly to the homes of almost 100,000 North American children ages 6 months to 8 years — and the four-year-old Israeli spinoff, Sifriyat Pijama which, in partnership with Israel’s Ministry of Education, distributes books to 120,000 children through local schools and anticipates increasing the number of children to 200,000 next year.

“Amazingly the program in Israel is extremely popular notwithstanding the fact that Hebrew books are not in shortage there,” Milstein said.

The Birth of a Movement

“The number of participants in Sifriyat Pijama B’America is growing exponentially,” Milstein said. “When we started out last year, we had a goal of reaching 1,000 families. A few weeks later, we already had 2,000 families receiving books on a monthly basis with close to a thousand on our waiting list. We are thrilled to have secured funding to be able to expand to reach an additional 4,000 families this year.”

He stresses that the goal is not that participants should become religious per se. “I’m not telling you what kind of Jewish life to keep as long as you’re a part of the Jewish people. Secular in Israel is still Jewish. Secular in America is nothing.”

Additionally, he feels that if united, the Israeli-American community could become a powerful movement. “We can’t count on Europe anymore for support. It will be a majority Muslim by 2050. The only country in the world that supports Israel is the U.S. mainly because of the strong Jewish lobby. Let’s transform the Israeli community into a powerful, productive force to support Israel.”

Today, the Milstein’s two oldest daughters are married to Jews. Their third daughter, who was born in the US, is a pro-Israel activist and serves as the New England campus coordinator of Hasbara Fellowships. Adam and Gila prefer not to imagine what would have been had they not gotten involved in Jewish education, community, and lifestyle. Now, they are passing the chain down to the next generations.