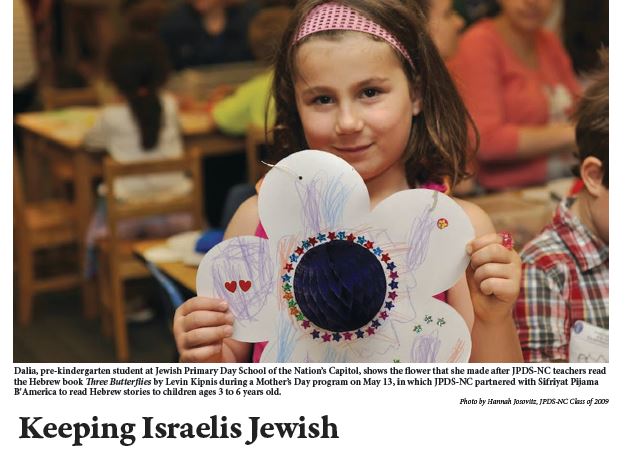 Two area day schools are the local hosts for an innovative new family program aimed at connecting Israeli families living in the U.S. to the American Jewish community.

Sifryat Pijama B'America is the brainchild of L.A. businessman and philanthropist, Adam Milstein. Based on the PJ Library program, modern Israeli children's books, published in Hebrew, are distributed free to area families during monthly programs at 30 day schools across the country. Locally, Gesher Day School in Fairfax and the Jewish Primary Day School of the Nation's Capital are Sifryat Pijama B'America sites. Milstein came to America from Israel when his daughters were young. Milstein and his wife joined a synagogue and enrolled their daughters in a private secular school. By junior and senior year of high school, Milstein realized that his daughters' friends (and boyfriends) were not Jewish. "When we told them they had to date and marry Jewish men they said, 'Why should we? If it's so important to you, why don't you live a Jewish lifestyle? Go to Temple? Keep
Shabbat?'" Milstein said.

He realized he had made a mistake. He started studying with Aish HaTorah and sent his daughters to Israel. One enlisted with the Israeli army. The other traveled with Birthright. Now they are both married to Jewish boys and the Milsteins have three grandchildren. "They say it wasn't because of me, but the facts speak for themselves," he said.

When philanthropist Harold Grinspoon successfully expanded his PJ Library program to Israel, Milstein contacted him to create a variation for Israeli and non-Israeli Hebrew speaking families in the U.S. PJ Library, Grinspoon's first program, ships high quality children's books to homes with young children. The books all have some sort of Judaic content, be it holiday and tradition or ethics and values. To register, a family must have young children and live in a community that sponsors a PJ Library. The program is funded in part by the Grinspoon Foundation and in part by the sponsoring community. According to the PJ Library website, they have 153,618 subscriptions.

In Israel, the Grinspoon Foundation has partnered with the Ministry of Education for the Sifryat Pijama program. Here modern Israeli childrens books are selected by the Israeli Ministry and are distributed through the children's schools. Three years into the program, Sifryat Pijama is distributing books to approximately 120,000 children and Milstein estimates it will reach 200,000 next year.

"Now comes us. We know Harold Grinspoon. We put one and one together," he continued. "There is a large Israeli community here. But the community tends to be unaffiliated. They send kids to public schools. When you send your kids to public schools, they aren't taught Jewish values. And the kids don't want to be different. They want to be American. And they tend to assimilate even faster than American Jewish children. We have a tremendous problem."

Which is why Sifryat Pijama B'America books are distributed to families during programs at area day schools. The program is sponsored by the Israeli Leadership Council, the Adam and Gila Milstein Family Foundation and the Harold Grinspoon Foundation. It is not part of PJ Library.

While the books help parents maintain Hebrew at home, the programs give the families a sense of Jewish culture and a chance to connect with other Jewish and Israeli families.

Eyal Leib, operations manager for Sixth & I Historic Synagogue, agrees with Milstein and believes it's even more complicated. He explains that it's different in Israel. Because of the influence of the religious groups on the Israeli government, there is a negative connotation for secular Israelis when they think about religion. Non-Orthodox families may not join a synagogue. "It took me awhile before I admitted to my friends that I work in a synagogue," said Leib. There's also a question of money. Leib believes that many Israeli parents may think that if there is an excellent public school available, there is no need to pay for a private day school. "The parents can provide the Hebrew learning and the Jewish holidays. I can't speak for all of the parents, but some parents think day school is a lot of tefillot [praying] and they don't want that. But this is because they
don't know the curriculum," he said.

Leib, who lives in Princeton, N.J., with his Israeli-born wife and two young children, has taught at a day school in Boston and was a basketball coach and substitute teacher at Rockville's Charles E. Smith Jewish Day School. In addition to speaking only Hebrew at home, he reads Hebrew children's books to his son Adam, 5 and daughter Lauren, 2 as a way to increase their vocabulary. And, when it comes to holidays and traditions, he preaches what he practices. "This week, it was Shavuot. I talked to Adam all week about the holiday. But we didn't go to synagogue because that's not what I do. But on Yom Kippur I will fast and I expect my kids to fast. It's very complicated. I can't answer for all Israelis, but I can answer for myself and for what I observe with my friends," he said.

Graciela Granek, who is also Israeli, is the Hebrew director and Judaic studies supervisor for Gesher Day School. "Many Israeli families don't think about Jewish education in the states. Israeli society is very cosmopolitan and for many Israelis, when they move to the states, they want their kids to learn about American culture," she explained.

Regarding day school education, "Many of them come with their own belief or perceptions of Jewish life in Israel and have a feeling that Jewish day school may reflect the haredi situation or the day schools in Israel, and that's not it. We have a full array of day school settings. Many [of the families] don't know about it and don't seek this information or consider when they select where to live or how to educate their kids. So Adam [Milstein] is right. If we can get Israeli families to see what day schools are like here, many may actually choose a day school education for their children."

Granek's next program is on June 24th. Her first program attracted 16 families. She tried to create an Israeli environment, serving Israeli snacks and drinks and playing Israeli children's music. During the program, she read a Sifryat Pijama story book and led the families in an activities related to the story. She also hopes the programs will help foster community among Israeli families and non-Israeli families with extensive knowledge of Israel and be the catalyst for an extended group to play and speak.

"We're very excited to have this program," Granek said of her school's involvement. "I embrace the opportunity. It's important for us for people to see Gesher as a center of activity and a place that promotes a lot of Hebrew."

Sifryat Pijama B'America's first year goal of 1,000 was surpassed almost immediately with 2,500 online registrations. For this year, Milstein has increased inventory to 6,000.

Quality Hebrew language children's books are hard to find in the U.S. "You can't just walk into a Barnes & Noble. You have to go to a website and then you can't really see them," Naomi Reem, head of school for JPDS-NC, explained. "A religious bookstore is not where Israelis would walk in to buy a book and these stores would not have a collection of modern Israeli books for children. They would have religious books."

She notes that these are quality Israeli books specifically selected by people who know education. "And getting the books at home is just a small part. The program is about getting the families together every month to do something around the book, helping people get together and getting to know each other and the day school. That's what brings people in. They talk to people with kids here, they learn about the school. I have no doubt some of the families who are not considering day school would do so now."

JPDS-NC is offering a registration program on June 10th. They hosted 25 families on their first event, which included a craft project for Mother's Day.

"I definitely think [Sifryat Pijama B'America] will work. Absolutely. I don't see why not. If the teacher is Israeli and they speak only Hebrew, yes, it will work," Leib concludes.

And Milstein is banking on that success, "There are 800,000 Israelis here. They're not going back to Israel. Should we let them disappear? Or should we help galvanize them into a community, into a political power, into a charitable power? That's what Israel needs."