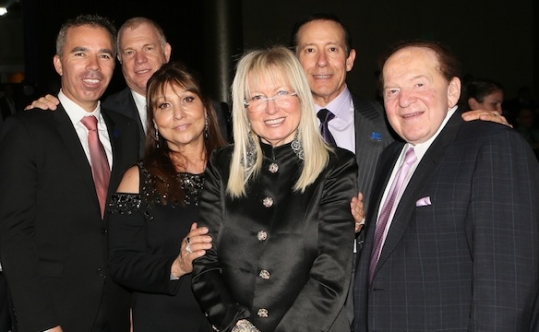 When the chief executive officer of the Israeli Leadership Council announced at the group’s March 10 gala that the nonprofit’s name is changing to the Israeli American Council (IAC), the reaction from the 900 people in attendance was modest. As animations of the group’s new logo flashed on screens around the Beverly Hilton ballroom, polite applause briefly drowned out the clink of silverware against plates.

But for the leadership of the ILC — now the IAC — the message embodied in the new name is significant, signaling the group’s increased comfort with its dual Israeli-American identity.

“We felt that the name ‘Israeli Leadership Council’ did not reflect what we’re doing today,” said Adam Milstein, an IAC board member.

Founded in 2007 as the Israeli Leadership Club by a group of local Israeli-American businessmen who joined forces to ensure they could mobilize their community in support of the Jewish state in times of crisis, the organization has since grown into a nonprofit with a $3 million annual budget.

Its mission is threefold — supporting Israel, strengthening Jewish identity among young Israeli-Americans and building connections between the Israeli-American and Jewish-American communities. To that end, the IAC supports more than a dozen different projects and organizations.

Adam Milstein first suggested to the board that the group change its basic brand, from “Israeli” to “Israeli-American,” about 18 months ago. Eli Tene, then the group’s co-chair and currently a member of its seven-person board, remembers reacting skeptically. “Why change something that’s working?” Tene remembers thinking, he said in an interview Sunday.

Success, indeed, is not at issue: In 2012, the organization reached about 50,000 people, up from 3,500 during 2010. Most of that growth can be attributed to two major projects: Taking charge of the citywide Celebrate Israel Festival last year, which drew 15,000 attendees to Rancho Park in May, and, secondly, helping to found Sifriyat Pijama B’America, which distributed free Hebrew children’s books to 2,000 families across the country in 2012, reaching an estimated 17,000 people. Both of those programs are projected to expand in 2013.

Still, Milstein was undeterred, and he lobbied his fellow board members in support of the name change. His argument was twofold: By defining themselves as Israelis, Milstein said, the current generation of immigrants are separating themselves from their American children, who “want to be like anybody else.”

Milstein also said he had come to realize that he could do more on behalf of the Jewish state, where he was born, by embracing his identity as an American citizen. “Nobody around us looked at us as Israelis, and we were defeating ourselves because we were not recognizing who we are,” he said.

A real estate investor who has lived in the United States since 1981 and been an American citizen since 1986, Adam Milstein is one of the country’s top donors to the American Israel Public Affairs Committee (AIPAC). When he has lobbied American and foreign officials on behalf of Israel, Milstein said he began to notice a subtle discomfort when he said he was “from Israel.”

“Nobody said it,” Milstein said, “but I would see it in their faces.”

If the old ILC logo — three white letters on a blue shield, flanked by gold olive branches — subtly suggested that the group was an arm of Israel’s foreign ministry, then the new IAC logo — a Star of David half-enveloped by red and white stripes — has far more in common with that of America’s pro-Israel groups.

Now, the IAC is pushing Israeli-Americans to get involved in local Jewish communities in the diaspora, as well as in Israel advocacy. IAC chair Shawn Evenhaim spoke about connecting Israeli-Americans to their Jewish-American counterparts at the Jewish Federations of North America’s 2012 General Assembly. Milstein addressed the importance of Israel advocacy at an IAC-organized panel discussion at AIPAC’s policy conference in Washington, D.C., earlier this month. He forcefully rejected the idea that Israeli-Americans have already “paid their dues” to Israel by serving in the IDF.

“This is your miluim service,” Milstein said in an interview in his office in Encino just a few days after the panel, referring to the month-long reserve duty all Israeli men are required to perform, over and above their required full-time military service. “This is how you support Israel.”

Boosting Israeli-Americans’ support for Israel is one key aspect of the IAC’s mission, and political leaders from all levels of government and from across the political spectrum attended Sunday’s gala.

Longtime Congressman Ed Royce (R-Fullerton) was there, as was the newly elected Rep. Tony Cardenas (D-San Fernando Valley). The two candidates who advanced to a May runoff for Los Angeles mayor, City Controller Wendy Greuel and City Councilman Eric Garcetti, were also present, and Israel’s Consul General in Los Angeles, David Siegel, read a letter from Bibi Netanyahu, thanking the IAC for strengthening the ties of Israeli-Americans to Israel.

Despite the absence of a few of the group’s biggest supporters — including Haim Saban, who was away on business — the IAC raised an estimated about $2 million on Sunday.

The Times of Israel: Why we set up the Israeli-American Council
Scroll to top