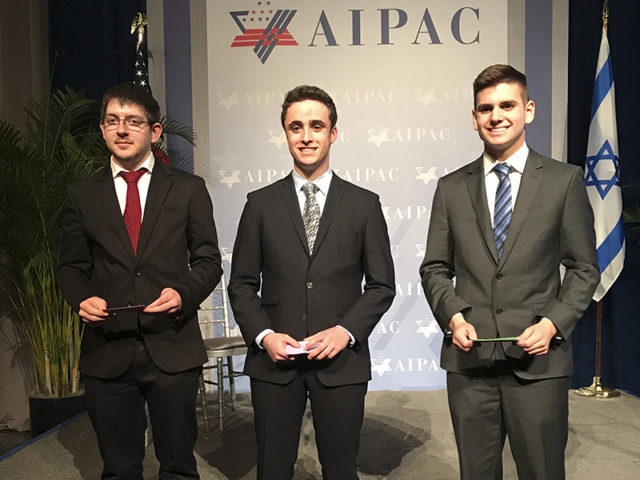 A team of students from TanenbaumCHAT took second place in a contest to design innovative approaches to pro-Israel advocacy, beating 30 university teams.

The Toronto Jewish day school was the only Canadian team, and the only high school, to enter the competition, which was sponsored by the Adam and Gila Milstein Family Foundation. The final round of judging took place at the American Israel Public Affairs Committee (AIPAC) Policy Conference, which was held in Washington, D.C., earlier this month.

READ: DOV LIPMAN – WHAT CAN WE LEARN ABOUT ISRAEL

“ILQ can change people’s perceptions of Israel,” said Weisleder. “When people see something linked to Israel, if they are anti-Israel, they’re not going to want to open it. This teaches them something about Israel.”

The game has not been developed yet, but the students and their staff advisors, Avital Aharon and Aviva Polonsky, hope to turn it into a reality. They envision a game that will offer prizes and feature entertaining guest hosts.

One of the contest requirements was that students partner with a non-profit organization. The TanenbaumCHAT students worked with Hasbara Fellowships Canada to develop the content for the game and hope to launch a test version in several Toronto schools. Once the concept is fine-tuned, they will apply for funding to develop the app, Roizenman said.

Robert Walker, the national director of Hasbara Fellowships Canada, said the project makes sense in a world in which people are glued to their smartphones.

“Gamification is a very popular trend in business these days. If that can work in the business world, there’s no reason it won’t work when we’re selling Israel,” he said.

This was the first time TanenbaumCHAT has entered the contest. Developing the project was an intensive endeavor, with the students working down to the wire to meet the deadlines. They learned they were finalists only two days before the conference started and hastily booked tickets to arrive in time for the AIPAC Shabbaton.

Gamification is a very popular trend in business these days. If that can work in the business world, there’s no reason it won’t work when we’re selling Israel.
– Robert Walker

Participating in the massive annual policy conference, which attracted 18,000 people, was an eye-opening experience for the students and staff, who heard talks from notable public figures, including Israeli Prime Minister Benjamin Netanyahu, Israeli Education Minister Naftali Bennett and U.S. Ambassador to the United Nations Nikki Haley.

Many speakers specifically mentioned the 4,000 students attending the conference. “You could see how impactful the youth are. We’re going to shape pro-Israel culture in North America,” Render said.

The students and staff were also surprised by the number of TanenbaumCHAT alumni they ran into at the conference, many of whom were working as rabbis and community leaders in the United States and Canada. “You can see the foundation CHAT builds in Israeli advocacy and leadership,” Render said.

While it was the school’s first time entering the competition, it won’t be its last. The students say they hope to come back to work with younger students on next year’s entry and to continue developing the app.

TanenbaumCHAT’s strong showing and the AIPAC conference has created a buzz on campus and, ideally, the school will take more students next year, said Polonsky, who teaches Jewish history.

“CHAT is very pro-Israel and the idea there’s another place we can educate students is definitely in the conversation,” she said.

And while it would have been nice to win the contest, that was not the school’s only intention. “We had a goal of promoting pro-Israel thinking outside of the box and getting students and parents excited about Israel. We reached our goal,” said Aharon, the director of educational technology at the school.

Why I’m Optimistic About the Jewish Future in America