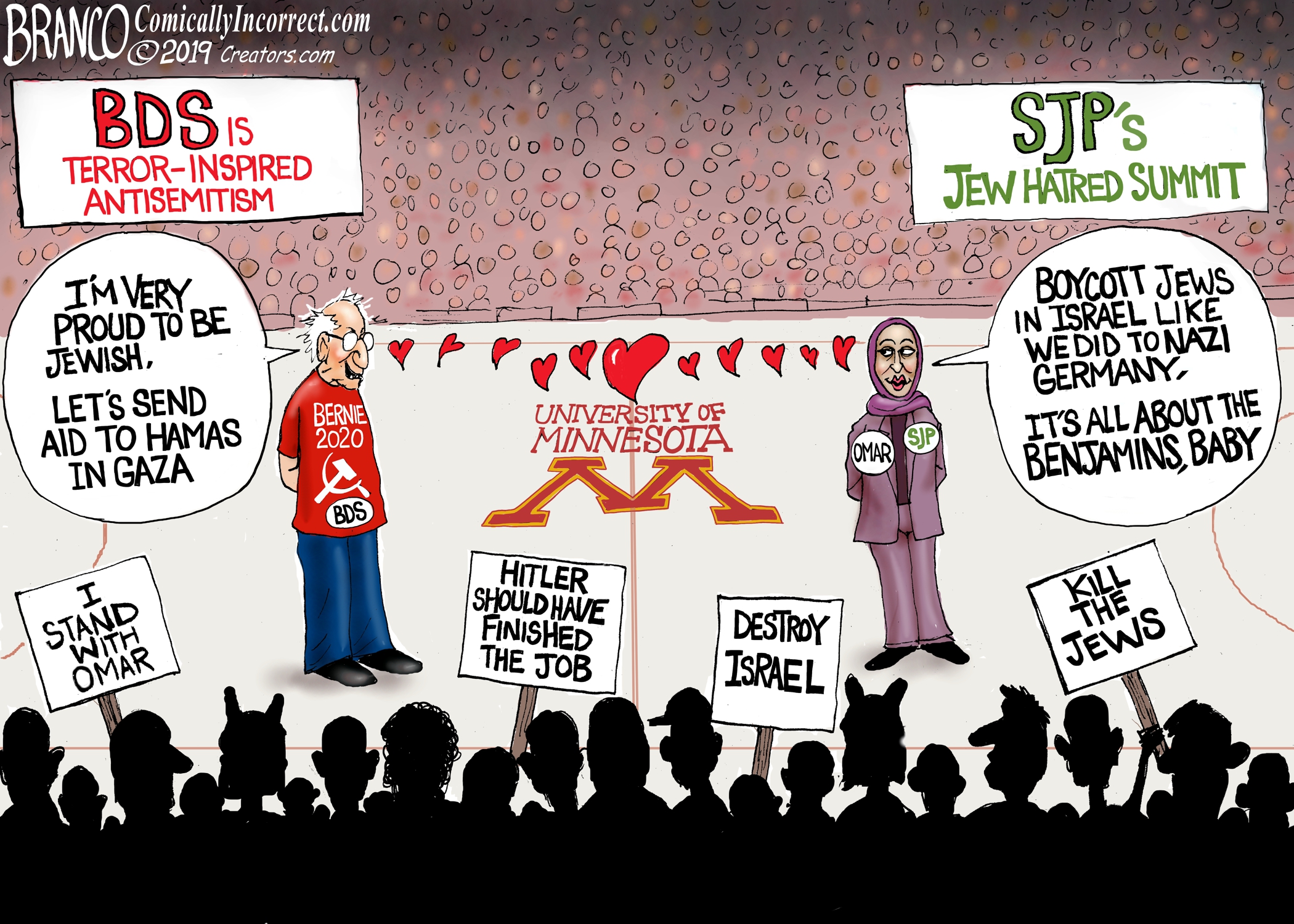 This article was originally published in Fox News on November 1, 2019.

Antisemitism did not die with the fall of Nazi Germany and its mass murder of 6 million Jews. The ancient hatred of the Jewish people has mutated like a deadly virus and has now infected many college campuses across the U.S. as a mainstream movement – and is being embraced at a national conference at the University of Minnesota this weekend.

The conference is being held from Friday through Sunday by Students for Justice in Palestine (SJP), which has been one of the main drivers of the antisemitic and anti-Israel Boycott, Divestment and Sanctions (BDS) movement on American college campuses.

The BDS movement was established by major Palestinian terrorist organizations in 2001 as a “non-military” way to eradicate Israel. SJP, its campus wing, was founded by the University of California at Berkeley Professor Hatem Bazian in 2005.

The SJP network is the leading student arm of the BDS movement in the U.S. Its annual conference serves as a conduit to push radicalism, violence, and antisemitism at colleges and universities across the nation.

The BDS movement seeks the destruction of Israel as the world’s only Jewish state by isolating Israel from every other country through economic, cultural, academic and diplomatic boycotts.

If BDS leaders had their way, no nation would sell products to Israel or buy Israeli products, no nation would have diplomatic relations with Israel, all Israeli educational and scientific institutions would be boycotted, and the Israeli tourism industry would die.

A report released Wednesday by the Institute for the Study of Global Antisemitism and Policy called the SJP “a main driver of Jew-hatred on campus” and listed dozens of instances of antisemitism involving members of the hate group.

Bazian and the other SJP founders, financial patrons, and ideological supporters have been linked to Islamist and Palestinian terror organizations such as Hamas, Hezbollah, Palestinian Islamic Jihad, and the Marxist Popular Front for the Liberation of Palestine.

Yet we see almost no pressure to keep this violent hateful incitement — reminiscent of the Nazi-era boycotts of Jewish businesses — off campuses and away from students.

SJP is guilty of bait-and-switch at all levels. It’s accepted as a “social justice organization” although it works to mainstream hate. It’s presented as a student-founded organization when it supports and coordinates its activities with the BDS National Council, which includes representation of “resistance” movements from internationally recognized terrorist organizations.

SJP claims to promote human rights and accurate information, while it actually spreads lies and propaganda that increase antisemitism – including  Nazi-era blood libel claims, conspiracy theories about Jews and dehumanization of Jews.

SJP does not promote open dialogue or debate between its BDS-supporting acolytes and pro-Israel students. It will not stop at anything less than the destruction of the Jewish state.

The environment SJP has created erodes the culture of discourse, liberalism, and tolerance that is foundational to not only the American university system but America itself.

While this coalition of hate operates on campus, BDS has also led to a resurgence of antisemitism beyond campus. The global campaign, supported by Jew-hating terrorists and activists, has revived the very same hatred that America worked to eradicate during and after World War II.

Unsurprisingly, over the last two decades, there has been a great correlation between the establishment of the BDS movement and the rise in antisemitic incidents in America and around the world.

A recent report published by the government of Israel – titled “Behind the Mask: The Antisemitic Nature of BDS Exposed” – shows how over the past 15 years, the BDS campaign has promoted demonization and delegitimization of the state of Israel, and by doing so has exacerbated antisemitic rhetoric against Jews in America and worldwide.

By hosting the SJP’s national conference at the University of Minnesota, the school is propping up hate. That is not OK.

All people opposed to antisemitism must pull our communal and financial support from institutions hosting the American mainstreaming of modern antisemitism. We must apply pressure from outside – mobilizing communities of shared values – and from within (drawing on students, faculty, staff, and alumni) to discourage this evil. The time is now to band together to put an end to the BDS movement.

America has all too readily ignored genocidal antisemitism before. We must recognize that the modern campaign has roots in hatred that runs just as deep and bloody as the ideology that fueled support for Nazi Germany.

Before the massacre of 6 million Jews in the Holocaust, American universities welcomed leaders from Nazi Germany – even though their horrifying racist ideology was well-known – while setting quotas to severely limit the enrollment of Jewish students.

In the wake of the Holocaust, antisemitism was no longer acceptable on American college campuses. The hatred of the Jewish people was suppressed and marginalized for about 70 years.

However, as the memory of the Holocaust fades and slogans such as “Never Again” and “Never Forget” are becoming old clichés, Jew-hatred is coming back on campus in frightening ways.

Today, universities are once again lending their platforms and legitimacy to mainstream the new antisemitism. The lessons of the past are seemingly forgotten, as elite institutions like Columbia University invite notoriously antisemitic world leaders such as Iran’s former president Mahmoud Ahmadinejad and Malaysian Prime Minister Mahathir Mohamad to address their students, opening their safe spaces to intolerance, prejudice, and hate.

The BDS movement and Students for Justice in Palestine are fundamentally anti-American as well as anti-Israel and antisemitic because they reject our most cherished values.

SJP should be ostracized on college campuses and students should be taught the facts about it and the BDS movement.

Adam Milstein and his wife Gila co-founded the Adam and Gila Milstein Family Foundation, providing charitable and philanthropic services to a wide range of organizations to strengthen the Jewish people, the state of Israel, and the U.S.-Israel relationship.

BDS is the new face of the old antisemitism: What will we do to stop it?