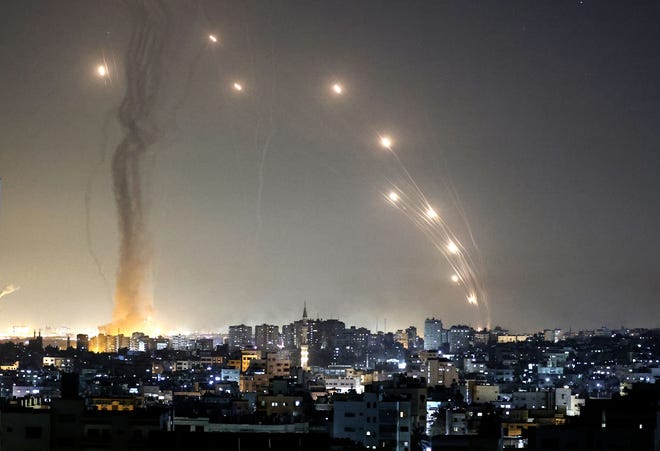 Biden needs to stand by Israel, against terrorism

This article was published in The Detroit News on May 20, 2021, written by Adam Milstein of the Adam and Gila Milstein Family Foundation, and James Jay Carafano of The Heritage Foundation.

Make no mistake, Hamas and Islamic Jihad (IJ) are terrorist organizations. Their attacks on Israel have one purpose — blood, anybody’s blood, Jew, Arab or Palestinian, on the streets for fomenting anger and outrage. The goal: to derail the momentum for peace and normalization between the moderate Arab nations and Israel.

The Arab crowds rioting in the streets against Israelis and Jews are motivated by their religious beliefs and by tribal loyalty. But the violence against Israel is primarily directed, motivated and influenced by Iran. This is a huge test for the U.S. and moderate Arab nations in the Middle East.

The governments of Morocco, Sudan, Bahrain, the United Arab Emirates and even Saudi Arabia, who understand and appreciate the strategic alliance with Israel, are forced to criticize Israel’s response to the attacks on its civilian population — and that is exactly the outcome the Iranians are looking for.

Hamas and IJ have exploited Palestinian unrest to launch rockets at Israel, provoking their fourth mini-war with the Jewish State since 2008. Violent clashes at holy sites in Jerusalem have benefited Hamas, the Palestinian wing of the Muslim Brotherhood, as well as IJ, which engineered the crisis as part of its annual offensive against Israel during Ramadan (the Islamic holy month).

These attacks occur at a time of political turmoil within Israel and coincide with the emergence of an ambivalent new policy from the fledgling Biden administration. President Joe Biden recently restored financial contributions to the Palestinian Authority, as well as the United Nations Relief and Works Agency, which critics had accused of partisan activities and corruption in providing aid to Hamas. At the same time, the Biden administration has launched a major effort to legitimize and negotiate with the terrorist Islamic State of Iran.

Without question, these recent incidents have put Washington in a difficult spot, engaging with entities that are fueling violence in the region. Many of the rockets, for example, were provided by Iran, which shares Hamas’ and IJ’s goal of destroying Israel.

While IJ is a direct proxy of Iran, Hamas is not. However, both terror organizations receive funding and weapons from Iran. Hamas also has its own reasons to escalate tensions. Hamas is enraged that the Palestinian elections were canceled; its members do not want to remain isolated, and they need to remain relevant. Violence is a means to gain power and global recognition.

As long as Hamas has a chokehold on Gaza, there can be no peace. And as long as there is no peace, they will continue to do Iran’s dirty work and try to topple the Abraham Accords.

Under these circumstances, there is a question Washington must ask itself: Are the Abraham Accords and the alliance between Israel and moderate Arab countries against Iran strong enough to stand against this? Or will this alliance crumble under the direction of Iran and pressure of radicals rioting in the streets? The likely answer is that the whole effort to build peace, stability and prosperity in the region will collapse without a robust response from the U.S.

Furthermore, if the U.S. fails to respond, it will project a position of weakness and provide legitimacy to terrorist groups. The results of a soft foreign policy approach to combating radical Islam are clearly evident in Yemen. Biden has suspended U.S. military support for a coalition of Arabs fighting against the Iranian-backed Houthi rebels, overturned the designation of the Houthis as a terrorist organization, and put a hold on arms sales to the United Arab Emirates and Saudi Arabia. This, in turn, only fueled further violence in the region, emboldened Iran and encouraged the Houthis to regularly launch missiles and drones on Saudi targets.

To respond from a position of strength, the administration must unambiguously support Israel’s right to self-defense, particularly at the UN, as well as diplomatic efforts by Egypt to wind down the crisis without jeopardizing Israeli deterrence of future Hamas and IJ rocket attacks. Israel is a bulwark against Islamic terrorism, and a strong, secure Israel bolsters America’s position in the region. Undermining Israel ultimately undermines American security interests.

The U.S. must hold accountable those seeking to undermine America and its allies.

The U.S. has to signal its abject disgust with Hamas and Iran and its direct proxies. The best way to do that is to pull the U.S. negotiating team working on the Iran deal out of Vienna until the violence stops.

Biden also needs to send a strong signal to the moderate Arab nations that the U.S. is fully committed to supporting and expanding the Abraham Accords.

Finally, the U.S. needs to work with Arab partners to start to undermine the influence and resources of extremist Iran Proxy groups like IJ and Hezbollah.

Iran’s attacks on Israel via its terror proxies is a test of American power. By responding swiftly and appropriately, the U.S. has an opportunity to re-exert strength in the region and undermine Iran’s influence in the Middle East.

James Jay Carafano, a Heritage Foundation vice president, directs the think tank’s research in matters of national security and foreign affairs. Adam Milstein is an active philanthropist and a co-founder of the Israeli-American Council and the Adam and Gila Milstein Family Foundation.

Fight Antisemitism: ‘Never Again’ Must Be Backed By Actions
Scroll to top