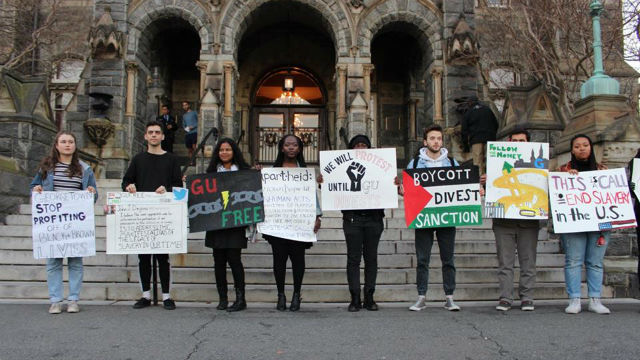 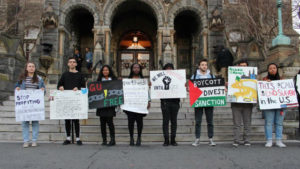 American Jewry has witnessed a tsunami of hate on college campuses and across our communities. In the past year, resolutions calling for a divestment and boycott of Israel have been considered or passed by 30 student governments across the U.S. Israel haters have charged Jewish undergraduates seeking student government positions at UCLA and Stanford with “dual loyalties,” claiming that their strong Jewish identities should disqualify them from representing other students. AEPi — America’s largest Jewish fraternity — has seen an unprecedented rise in attacks on its members and vandalism on its houses. On and off campus, pro-Israel and Jewish students have been targeted, harassed and even physically assaulted.

These developments have spurred serious concern and significant conversation within the American Jewish community. Many debate the causes for these incidents. Others question the seriousness of the threat. As philanthropists and pro-Israel activists, my wife and I have engaged for many years on the front lines of the fight, working with a range of organizations that seek to defend Israel and the Jewish people. We’ve observed three basic facts about the Boycott, Divestment and Sanctions (BDS) movement — and its affiliated hate groups — that must inform the way we move forward.

First, this movement seeks to eradicate Israel, plain and simple. After failing to destroy the Jewish state with bullets and bombs, Israel’s enemies have turned to tweets, memes and YouTube videos. In recent years, these hate groups have learned that they are much more effective when posing as social justice activists who simply oppose Israel’s policies. Too many in our community have bought the lie that this is a response to actions taken by the Israeli government. They believe BDS will go away if Israel withdraws from the land acquired from Jordan during the Six-Day War — or finds another way to engage a Palestinian leadership that has rejected numerous peace deals offering 97 percent of this territory. The reality is that these hate groups don’t recognize the right of Israel to exist within any borders. The maps they publish of the region tell the whole story about their true goals, depicting a single Palestinian state that extends “from the river to the sea” with no trace of Israel.

Second, BDS is anti-Semitic. While tyrannical regimes trample on human rights throughout the Middle East, BDS chooses to single out only the Jewish state, the region’s only democracy, for criticism and boycott. By trafficking in vile lies about Israel and launching accusations of genocide and apartheid, these hate groups seek to demonize the Jewish state and boycott it in the same way anti-Semites have long demonized the Jewish people and boycotted Jewish businesses. If their movement is really about Palestinian welfare, why hasn’t there been a single BDS resolution targeting Lebanon, where Palestinians are kept as second-class citizens, denied the right to own property, and prevented from entering professions such as law and medicine? If they are really concerned about human rights, why hasn’t there been a single BDS resolution about Iran, where women are subjugated, homosexuals are hanged and journalists are jailed?

Third, this movement is well funded, nationally organized, and connected to a range of radical, anti-American, anti-Western and, in some cases, terrorist organizations. Hatem Bazian — the co-founder of Students for Justice in Palestine — publicly called for an intifada inside of the United States against the American government. Many former leaders of the Holy Land Foundation — a front group convicted of raising millions for Hamas that was shut down by the U.S. government in 2008 — now lead American Muslims for Palestine, the largest umbrella organization supporting BDS activities on and off campus by raising money, developing anti-Israel materials, organizing conferences and arranging speakers for events. Masquerading as social justice activists, this small group of dangerous radicals has been able to brainwash large numbers of students on campus after campus, forming alliances with groups working to promote rights of minorities, women and LGBT members.

In the face of an anti-Semitic enemy committed to the destruction of Israel — and willing to play dirty — what is the best way to respond? Many pro-Israel organizations are doing important work in education, public diplomacy and training, which must continue. Yet, in the face of this onslaught of hate and intimidation, we need a new infusion of resources, a new framework for fostering collaboration and new advocacy tools to beat back the bad guys.

Last month, I was honored to help organize a summit in Las Vegas hosted by Miriam and Sheldon Adelson to bring together more than 50 organizations in the battle against these hate groups. We’ve formed a task force called the Campus Maccabees, which will organize a nationwide movement to fight anti-Semitism and the hate groups that attack the Jewish people and Israel on American universities and beyond.

We believe that this new task force will be a game changer in this fight, coordinating the work of the very best pro-Israel organizations in unprecedented ways. We will go on the offense against Israel’s enemies. We will reveal the baseline anti-Semitism of this movement, expose its desire to eradicate the State of Israel and give our students the tools to defeat it.

As part of this campaign, we must tap into a unique strategic asset that has not yet been fully leveraged: the Israeli-American community. For too long, most Israelis living in America have remained separate from the traditional Jewish community and disengaged from Israel advocacy efforts. Eight years ago, I joined with several other Israeli-American leaders in Los Angeles to found the Israeli-American Council and change this reality. Israeli Americans are knowledgeable and passionate about this subject. They can speak from personal experience — it’s much easier to explain Israel’s security challenges when your family lives in Sderot or you have served in the Israel Defense Forces. Israeli Americans — instilled with our culture’s characteristic boldness — can form an army of activists who are unafraid to stand up and speak out against the lies about the Jewish state and the Israeli people.

We’ve reached a critical tipping point. We need everyone in the pro-Israel community to lend their skills to this fight as we realign our strategic focus from reactive to proactive. With strength, determination and unity, we can show the anti-Semites taking over America’s universities that tsunamis travel in more than one direction.

Adam Milstein is an Israeli-American philanthropist, activist and real estate entrepreneur. To learn more about Milstein’s work in pro-Israel advocacy, visit the Adam and Gila Milstein Family Foundation or follow him on Twitter @AdamMilstein.