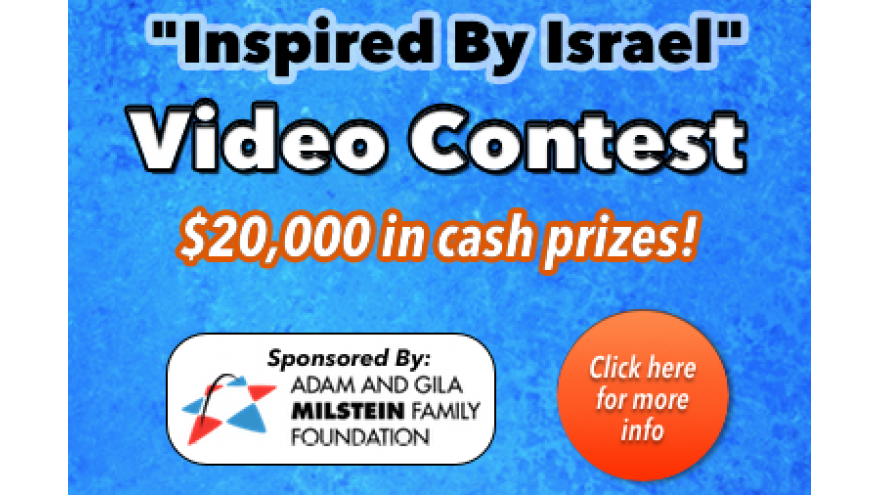 Entrants must register by June 24, and videos must be submitted by July 23. The public will be able to vote on their favorite videos online from Aug. 6 through Aug. 13. The contest offers $20,000 in cash prizes, including a Grand Prize of $8,000.

(May 27, 2018 / Sponsored) The third annual “Inspired by Israel” video contest launched this week, in partnership with the 12Tribe Films Foundation, and the Adam and Gila Milstein Family Foundation. Hosted on Israelvideonetwork.com, the contest offers cash prizes to videos that entertain, educate and inspire people about Israel. A total of $20,000 in cash prizes will be awarded to the winning videos, including an $8,000 Grand Prize.

“This contest is a chance for both professional and amateur filmmakers to show the world the amazing people, places, and innovations of Israel,” said philanthropist Adam Milstein. “This is a unique opportunity for people of all backgrounds, faiths, and ages to share with the world why Israel inspires them—expressing that through humor, original music, documentary-style research and more.”

Entrants must register by June 24, and videos must be submitted by July 23. The public will be able to vote on their favorite videos online from Aug. 6 through Aug. 13.

Following a period of public voting, the top 11 prizes will be selected by a panel of independent experts, including philanthropist Gila Milstein, Jewish Journal/Tribe Media president David Suissa and president of Israel21c Amy Friedkin. Five other winning videos will be based on the public’s votes, and three additional “staff picks” will be chosen by the Israel Video Network.

The winners will be announced at an awards ceremony at the end of August.

Last year, the winners were announced via live-stream at a special ceremony in the City of David featuring Jerusalem Mayor Nir Barkat. During the 10-day period of public voting, entries received more than 500,000 views in 236 countries.

The 2017 winning video, “Olah Chadasha (New Immigrant),” poetically explored a teenager’s love for her home of Israel five years after making aliyah. Its creators, sisters Sivan Felder and Batsheva Shachnovitz, were profiled in several newspapers, including The Times of Israel and the Algemeiner.

From Auschwitz to America: Lessons from Europe’s Killing Fields
Scroll to top