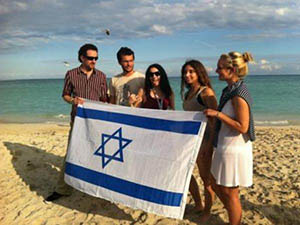 For Israelis living in America for an extended period of time, locating an embracing community and creating a national identity can be a conundrum for many. Am I an Israeli? Am I an American? How does Judaism play a role in my life? How can I support Israel while living here?  These are just a smattering of questions that ruminate in the minds of Israeli-Americans as they grapple with themselves and their contemporaries for cogent answers.

Enter Adam Milstein, a native born Israeli who arrived in the United States in 1981. Today, this man of boundless energy, passion and commitment to his people, his country and his identity as a Jew and an Israeli-American is at the helm of a nascent organization called the Israeli-American Council.

In a voice reverberating with a palpable enthusiasm, Mr. Milstein told the Jewish Voice in an exclusive interview of his role as co-founder and National Chairman of the Board of the IAC, of the inception of the organization and the widespread impact it has had it galvanizing the Israeli-American community.

"As Israeli-Americans, we can be legitimated, we can have a sense of purpose; we can rise from our slumber and be active," declared Mr. Milstein.

"Today, the IAC is active in 9 different regions across America and that is a far cry from when we began," he recalled.

As a real estate investor, community leader, and active philanthropist, Mr. Milstein has not only given of his time to the IAC but is linked to over 100 organizations. As the President of the Adam and Gila Milstein Family Foundation, his philanthropic work is centered on strengthening the State of Israel and the Jewish People.  Having served in active duty with the Israel Defense Forces during the Yom Kippur War, Mr. Milstein married Gila in 1974 and graduated from the internationally renowned Technion Institute in Haifa in 1978. He earned an MBA from USC in 1981 and embarked on a career in commercial real estate in Southern California.

Mr. Milstein, his wife, their three children and grandchildren reside in Encino and it is in LA that he is a managing partner of Hager Pacific Properties, a private commercial real estate investment firm that owns and manages several million square feet of commercial and industrial real estate throughout the United States. He sits on the boards of the AIPAC National Council, StandWithUs, the Jewish Funders Network, and the Los Angeles Board of Birthright Israel.

"After getting into the real estate business in southern California, my plan was to make enough money to pay back my tuition loans, but it soon became clear that the possibility of a permanent return to Israel was non-reversible," said Mr. Milstein.

Being cognizant of the fact that his future was on these shores, Mr. Milstein wanted to use his newfound success and status as a successful businessman to support Israel and help others.  Today, he spends 80% of his time engaged in his ubiquitous philanthropic endeavors. "To me, philanthropy is like a business. I want to build a special plan and program, become actively involved and work to expand it as much as possible."

About eight years ago, Mr. Milstein and other Israeli philanthropists residing in Los Angeles were approached by the Israel Consul General of the city to see what could be done to unite the 250,000 plus Israelis living there.

"Before we even thought of creating the IAC, we really had to devise ways in which we could reach out to Israelis as none of us knew how to talk to them about ensuring their Jewish and Israeli identity," said Mr. Milstein.

At its infancy, Mr. Milstein was one of six people who agreed to take on this project. "We looked at the IAC as a start up business and lay leaders were there from the beginning. We established a very clear mission. We wanted Israeli-Americans with an array of cultural, social and political events that would really be a catalyst for them to seriously explore both their Jewish and Israeli identities," he said.

He added that, "We really wanted to support Israel from here and we wanted our community to merge into Jewish life."

Mr. Milstein explains the genesis of the Israeli-American label. "We are Americans of Israeli descent so we adopted this identity and everyone felt very good about it."

"Israeliness if you will,” says Mr. Milstein is common to the people of Israel. He adds that it is a love of Israel, its culture, its heritage and the special set of values that each Israeli shares.

Because the IAC's main objective is to find common ground among Israelis living in the United States, Mr. Milstein declared most emphatically, "We don't discriminate. One can be an Orthodox Jew or completely secular and it doesn't matter to us. We are here to export Israeliness to the Jewish community."

The nascent IAC now includes 18,000 families nationwide and as a vital component of American society, they play a major role in social activism, academia, culture and innovation. The IAC’s effectiveness and success as the largest Israeli-American organization is the direct result of its ability to activate, and engage this unique community nationwide. The IAC strives to achieve these goals through programs and events for all ages, as well as by empowering and sponsoring a wide array of non-profit organizations within the Israeli-American community.

For the toddlers and very young children, the IAC has established the Sifriyat Pijama B’America program where Hebrew and Jewish family engagement takes place on a literacy level. The passing on of Jewish values is conducted by mailing free, high-quality Hebrew children's literature and music to families on a monthly basis to children ages 2-8 throughout the United States.

Says Mr. Milstein, "These books are a gift for each family to keep and re-read to their kids. We want the children of Israeli-Americans to understand the heritage of their parents and grandparents, By reading them books in Hebrew and conveying Jewish values, we keep the Hebrew language relevant for them and educate them about their specialness as Jews." IAC Mishelanu is a college campus leadership program that allows Israeli-American students on campus to meet, explore their Israeli-Jewish identity and their connection to the State of Israel. It is a national campus program that provides a “Home” to Israeli-American students in order to strengthen and maintain the identity of the next generation: Culture, Language Heritage and strong connections to Israel.

Today Mishelanu is offered in more than 35 campuses across the US.

Mr. Milstein also speaks of the relevance and impact of the Dor Chadash program. "This is probably one of our most important programs because it is designed for young Israeli-American professionals. It is they who are talking to the community, teaching them about the alarming escalation of anti-Semitism throughout the world, and the protracted battle that we are confronting in the BDS movement."

Because the IAC now has fully functioning programs in Boston, Florida, Las Vegas, Los Angeles, New Jersey, New York, Philadelphia and Washington, DC, group members are in a much better position to connect and unite.

Besides mobilizing the community to respond to strategic causes that support US-Israel related initiatives and Zionist education for the second- and third-generation of Israeli-Americans, Mr. Milstein says that one of the gravest dangers that we face today is radical Islam. "I lecture regularly on the nefarious agenda of the BDS movement and I can tell you that radical Islamists are the driving force behind it. We have to come to terms with the fact that radical Islamist leaders have publically stated their intent to eradicate both the United States and Israel."

Issuing a clarion call to front line Jewish activism, Mr. Milstein intoned, "What starts with the Jews does not end with the Jews."

For more information on the Israel-American Council, please visit http://www.israeliamerican.org/.