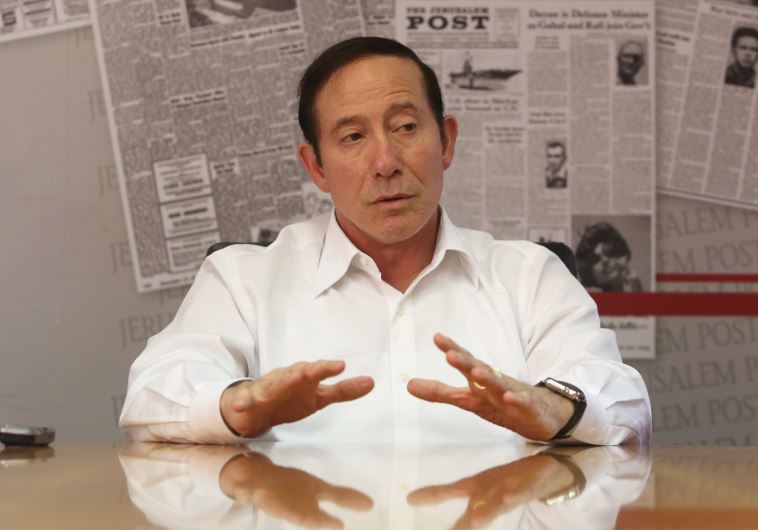 Adam Milstein tells the ‘Post’ why the IAC should be spearheading the battle against BDS. As national chairman of the Israeli-American Council, an umbrella group of Americans of Israeli descent living in the US, the Los Angeles-based Adam Milstein sees himself as the "connector" between Israel and the US, and at the forefront of fighting the anti-Israel BDS movement.

"We are the nexus between the Israeli and American people,” the affable Milstein says in an interview withJerusalem Post editors during a recent visit to Jerusalem. "We feel that the Israeli American community is equipped and has the information necessary to lead the fight against BDS." Under Milstein's leadership, the IAC has emerged as a powerhouse. Last June, he helped to organize a summit that brought together philanthropists such as Sheldon Adelson, a Republican, and Haim Saban, a Democrat, as well as some 60 American Jewish organizations at the Campus Maccabees summit in Las Vegas, to "harness the full might of the pro-Israel community to defeat the hate groups now spreading anti-Semitism and lies about the Jewish state on America’s college campuses." "We know that BDS is not just an anti-Semitic movement, but a movement to eradicate the State of Israel," Milstein says, sternly. "I don't think the people of Israel understand that. We live in the US and we see what the leaders of this movement are saying. They're saying that Israel should not exist, and that from the Jordan River to the Mediterranean Sea, there should be a free Palestine.”

Milstein, who will be participating in a panel discussion on countering BDS at the Jerusalem Post Conference in New York on May 22, strongly believes that the IAC should be leading the battle against the delegitimization of Israel.

"We got a big problem in explaining ourselves when people are not interested in listening. We need to fight back. What Israeli Americans bring to the table is that we are willing to be offensive. We should be at the forefront of the fight against BDS in the United States," he says.

Milstein believes there are some one million Israeli Americans in the US, noting that the IAC reaches about half of them via its 10 nationwide offices.

The IAC considers itself non-partisan when it comes to both Israel and the US, Milstein says.

"We don't have any political affiliation, not in Israel and not in the United States. We believe that the people of Israel spoke freely and democratically, and we support the people of Israel and the government of Israel, whoever that is. We don't get involved in politics. The same thing in the United States. We don't take sides. So when we have our conferences in DC, we invite people from across the political rainbow." The Haifa-born Milstein, 64, moved with his wife, Gila, from Israel to Los Angeles in 1981, initially to get his masters' degree in business administration at the University of South California. But they kept postponing their return, he became a successful real-estate investor, and so they stayed. Fifteen years ago, they established the philanthropic Adam and Gila Milstein Family Foundation, and today they have three daughters, the last one of whom was born in the US, and three grandchildren.

"We set out to do whatever we can to strengthen the State of Israel, the Jewish people and obviously the strong connection between them, which makes each one of them stronger," he says. "Everything that we do in the foundation, in our personal lives and in the IAC is really to accomplish those two goals." One such project is Sifriyat Pijama B'America (or the Hebrew PJ Library, as it is affectionately called), which delivers free books in Hebrew every month to the children of Israeli families living in the US.

"We started in 2011 with a thousand families, and today we're reaching 18,000 families nationwide on a monthly basis," Milstein says. "The aim was to strengthen Hebrew, Jewish values, and the Israeli American community and today we have expanded the idea through partnering with 200 different Jewish organizations, from schools, JCCs and federations. Sifriyat Pijama B’America is a great story. It paved the way for the IAC. Wherever I go, people tell me, 'You changed my life!'" The idea to establish the IAC (first called the Israel Leadership Council) began after a pro-Israel rally organized by then-Israeli consul-general Ehud Danoch during the Second Lebanon War in 2006. When he noticed the lack of Israelis, Danoch approached a group of businessmen, including Milstein, with a mission to begin a philanthropic organization to engage Israelis living in the US.

"We developed the concept to reach the Israeli community in Los Angeles to become more connected to Israel, to come to the rallies, to help Israel in the case of emergency, but over time, it developed into something much, much bigger than we envisioned," Milstein says. "Our mission today is to reach Israeli-Americans wherever they may be in the US, and unite them into one organization that is very big, very influential and very philanthropic. We understand the challenges that the Israeli people face and we live in America. There's nobody better than us to make the connection between the two people. In this respect, we want to reach out to Latinos, and Christians and Evangelicals and African Americans, and connect with them on mutual interests, in order to make a strong connection between the American people and the Israeli people." Milstein says he is fortunate enough to devote about 80 percent of his time today to philanthropic projects.

"Gila and I wanted to be active philanthropists, and not just write out checks," he said. "It's really everything from A to Z. You have an idea, you want to build a plan, you want to see it come to fruition. You put money in it and you put time into it, and you use all your resources to make ideas happen." Among other things, they bring Jewish and non-Jewish campus leaders to the annual AIPAC conference, and send 40 non-Jewish students annually to Israel on a program similar to Birthright.

Milstein makes a point of maintaining contact with the students after the programs, and he believes some of them will be the leaders of the future.

He says he is motivated by the belief conveyed to him by his modern Orthodox business partner that "whatever we give, God gives us back ten times more," and his desire to keep his own daughters and their families connected to Judaism and Israel.

"I have created my own kind of philanthropy over the years, and I have gotten the reputation that I am some kind of Jewish connector, because I'm funding some 100 organizations and I know who operates in every field," he says, with a knowing smile. "If there is a mission, I know who can help me, and who is irrelevant.”

Milstein sits on the board of several organizations, including what he calls one of the best Israel advocacy groups, StandWithUs, and is always on the lookout for new projects.

"People with ideas come to me, and if I like the ideas, I fund them, often with huge success," he says, taking out his cellular phone. "For example, there is this new phone application called Talk Israel. You download it, it asks you what subject you are interested in, and it sends you articles and videos about the things that you like, which you can share on your social media channel by a push of a button."