Newsroom - The Diversity, Equity, and Inclusion (DEI) Policies: A Danger to Jews and All Americans 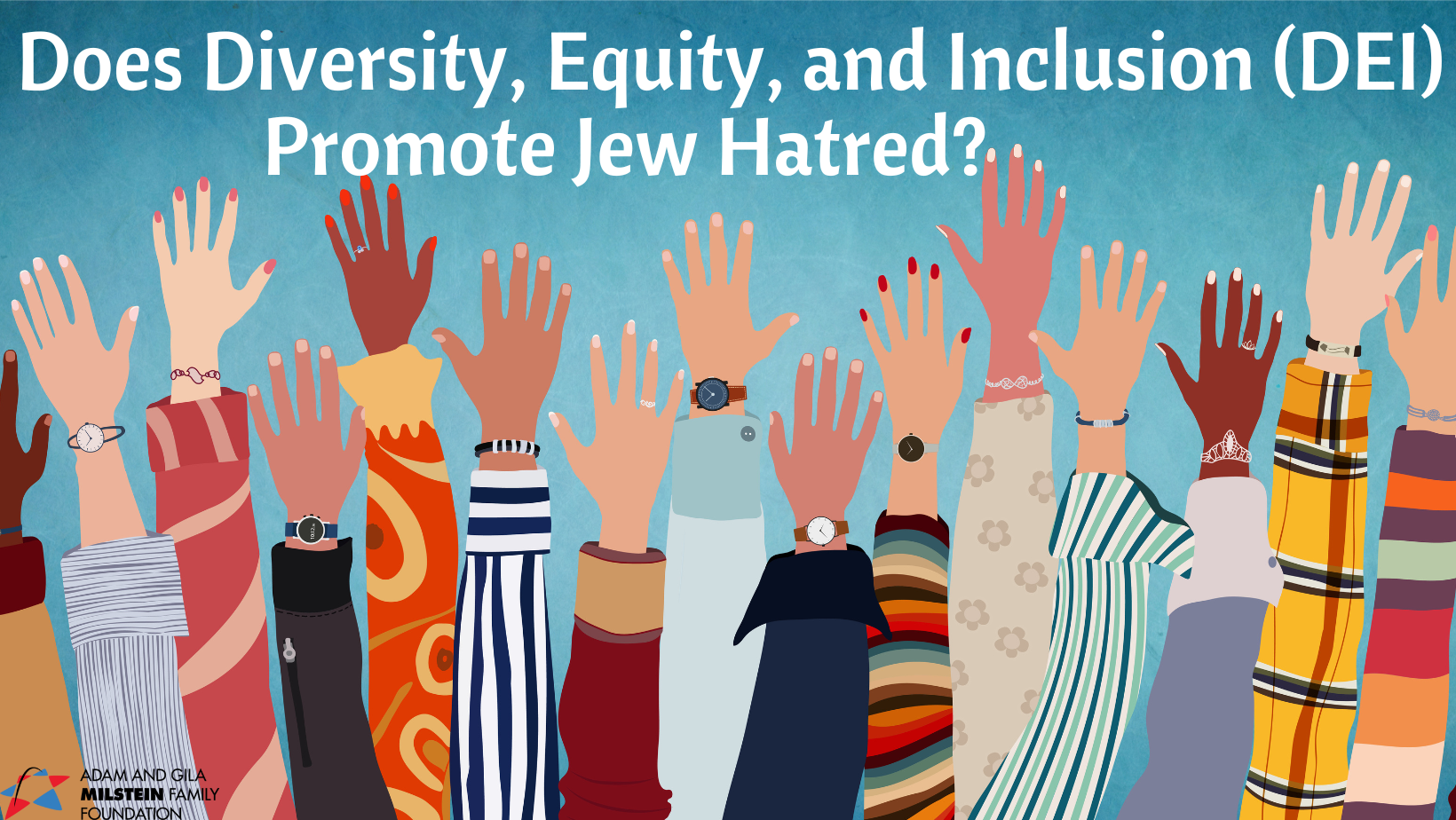 The Diversity, Equity, and Inclusion (DEI) Policies: A Danger to Jews and All Americans

This article was originally published in the Jerusalem Post on July 5th, 2022, written by Adam Milstein.

Diversity, equity, and inclusion (DEI) offices, officers, policies, and programming are being increasingly embraced in American institutions, from government to the corporate workplace. This is particularly true in education, from leading American universities to elite prep schools. In fact, one sampling of leading American universities found DEI staff making up an average of 3.4 positions for every 100 tenured or tenure-track faculty members and outnumbering by a factor of at least four the staff dedicated to helping students with disabilities.

The ostensible goals of DEI are positive: to promote the representation, participation, and fair treatment of historically marginalized groups. In practice, though, DEI, which is closely linked to critical race theory (CRT), has been deployed to advance a radical agenda that undermines fundamental American values by promoting equality of outcome over equality of opportunity, collective identity (race, gender, etc.) over individual character, censorship of opposing viewpoints over freedom of speech, and a victim culture that crudely bifurcates society into oppressors and oppressed.

Along with embracing other favored radical causes, DEI is also being weaponized against Jewish students, maliciously portraying them and the Jewish State as wanton oppressors. Thus, with the expanding number and power of amply funded and staffed DEI offices that, rather than thwarting the rise of anti-Israel sentiment and restraining hostility toward Jews, actually contributing to it, American universities are becoming hotbeds of antisemitism.

The rise of antisemitism on college campuses is continuing and has already been well documented. A 2021 survey by Hillel and the ADL found that one in three Jewish college students personally experienced antisemitic hate in the previous academic year. Jewish students regularly have to contend with the demonization of Israel and its supporters, obscene Holocaust comparisons and minimization, negative stereotyping, and other common antisemitic tropes.

According to a December 2021 Heritage Foundation report, “Inclusion Delusion: The Antisemitism of Diversity, Equity, and Inclusion Staff at Universities,” which analyzed the Twitter feeds of hundreds of DEI university personnel, there is a disproportionate hostility toward Israel among university DEI staff. Malicious charges they have levied against Israel on Twitter include describing the Jewish State as an “apartheid” or “colonial” state and accusing Israel of engaging in “genocide” or “ethnic cleansing.”

Instead of creating a welcome and inclusive environment for Jewish students, who overwhelmingly feel a strong connection to Israel, DEI officials are engaged in anti-Israel demonization that promotes antisemitism and legitimizes Jew-hatred on campus.

In one particularly egregious illustration of this phenomenon, Yasmeen Mashayekh, a University of Southern California (USC) student senator for diversity, equity and inclusion, tweeted in May 2021 that she wanted to “kill every motherf***ing Zionist.” Despite this and other hateful messages in which she expressed support for terrorism and the murder of Israelis, she has not been disciplined by USC and was able to retain her student senator DEI position.

The harm that DEI programming and personnel cause Jewish students isn’t limited to higher education. It even extends to schoolchildren. A Jewish parent, Jerome Eisenberg, is suing the prestigious private K-12 Brentwood School in Los Angeles for engaging in a DEI-driven “scheme to transform the school under a racially divisive, antisemitic ideology that seeks to indoctrinate children to reject Western values.”

In recent years, the curriculum at Brentwood has taken a radical, racially divisive turn after it was handed over to its “Office of Equity and Inclusion,” whose “staffing had increased ten-fold in a short period of time.” According to Eisenberg, “the school held racially segregated meetings and encouraged students to treat Jewish people as ‘oppressors’ and discriminated against a Jewish group of parents.” When he expressed his concerns about antisemitic discrimination, the school threatened to expel his 8th-grade daughter immediately and ultimately effectively did so when they denied her from returning the following school year.

It is deeply troubling that DEI personnel and programming, which is ostensibly committed to combatting bias and hate, is actively contributing to antisemitism in the American education system. As I have repeatedly warned, though, antisemitism is not just a Jewish problem – it is an American problem. DEI policies may disproportionately target and harm Jewish students, but the DEI agenda ultimately seeks to undermine and replace fundamental American values and replace it with its own radical vision. As we’ve seen before, what starts with elites quickly spreads to society as a whole. We must combat these ethically corrupted DEI efforts before they do more harm to Jewish students and ultimately all Americans.

The writer is an Israeli-American “Active Philanthropist.” He can be reached at [email protected], on Twitter , and on Facebook .

This op-ed is published in partnership with a coalition of organizations that fight antisemitism across the world.

Podcast: Adam Milstein Speaking with the American Friends of Unit 669, the Combat...

Cultivating the Jewish Venture Philanthropists of the Future
Scroll to top