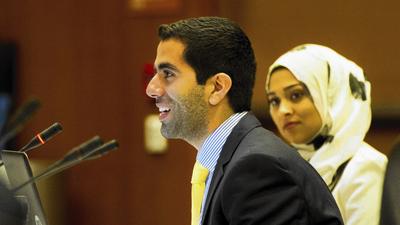 By LARRY GORDON For the second time in two years, passions surrounding the Israeli-Palestinian conflicts have entered an unlikely forum: the UC regents' selection of student representatives on the university governing board The regents voted Wednesday for a Jewish undergraduate from UCLA to join a Muslim from UC Berkeley as the student voices on the panel. The two, who both faced controversy over their selections, promised to cooperate on student-related causes, although they have taken opposing positions on whether UC should divest its holdings in companies that do business with the Israeli military. The UC regents confirmed Abraham "Avi" Oved as the new student representative, despite protests from a pro-Palestinian group and others that he may have a conflict of interest. Critics say his campus political campaigns were supported, at least indirectly, by a donor who backs Israeli causes. Oved served as internal vice president of the UCLA campus undergraduate student government and is active at the UCLA Jewish Student Union and the Hillel organization. Last year the board selected Sadia Saifuddin, a UC Berkeley student government leader, who is now the voting student regent through the upcoming school year. Some Jewish organizations opposed her selection because Saifuddin, the first Muslim student regent, supported the campaign for UC divestment. Oved opposed such divestment and the regents are considered unlikely to approve such a controversial financial move. Regent George Kieffer, who heads the committee on student regent selection, said there were parallels in the two consecutive years of controversy. "That's what happens at a university with differences of opinion," Kieffer said after Wednesday's vote. But he said he was pleased that Saifuddin, who cast the only vote against Oved's confirmation, nevertheless said the two will work together. The group Students for Justice in Palestine contended that Oved had unseemly connections to Adam Milstein, a businessman who supports Israeli causes and has expressed opinions the regents consider offensive to Muslims. Milstein donated money to the UCLA Hillel, according to Oved. The Hillel group gave financial support to the campus political slate that included Oved, he said. Oved, whose parents emigrated from Israel, has denied directly taking any of Milstein's money for his political races and has said opposition to his regent nomination arose because of his anti-divestment stance. Oved and his supporters note that UCLA has no rules banning donations to student campaigns. Milstein said in a statement Wednesday he was pleased by the regents' vote but emphasized that neither he nor his family foundation donated to Oved. The allegations about Oved's funding were part of an "anti-Semitic smear campaign" meant to intimidate pro-Israel students, he said. Milstein denied that he was anti-Muslim: "The one thing I actually am is pro-Israel…. That, by default, does not make me anything else." The UC systemwide student association recently sought to delay the confirmation vote until the next regents meeting in September so the situation could be more fully investigated. Several student leaders, speaking at the meeting here Wednesday, said the board showed disrespect to student opinion by moving ahead. Demonstrators silently stood in protest after the vote, holding signs that read "Not My Student Regent." The regents rejected the call for postponement, saying Oved had done nothing wrong. Kieffer noted the UC student association had done much of the thorough screening that led to Oved's nomination. He said it would be "meaningless" to delay since UCLA's student election code does not require disclosure of campaign donors. Saifuddin said she could not support Oved's nomination when so many students wanted further investigation. "It is greatly troubling that students' concerns about their representative are being dismissed," she said. Yet, Saifuddin promised to guide Oved "through the myriad moral and political factors" student regents face. Oved, an economics major who grew up in Encino, said Middle East issues are not relevant to the most important issues facing UC. He said he wants to work on such efforts as boosting financial aid, increasing classes, helping victims of sexual assault and improving mental health services. And he said he would "reach out to communities that may have felt uncomfortable" with his nomination. Oved quoted the late feminist poet Audre Lorde in his statement that people should honor their differences. "This sentiment of recognizing, accepting and celebrating differences is one I wish to carry throughout my term as student regent," Oved said. He will serve one year as the student regent designate, able to offer opinions but barred from voting on UC issues until he starts his term as a full regent in the 2015-16 school year. In other business, the regents heard from members of a task force recently formed by UC President Janet Napolitano to develop better ways of preventing and investigating sexual assault allegations on UC campuses. The group's chair, Sheryl Vacca, a UC senior vice president and chief compliance and audit officer, said a wide range of recommendations would be presented at the regents' September meeting with a goal of transforming UC into "a national leader." [email protected] Twitter: @larrygordonlat Copyright © 2014, Los Angeles Times

Jewish Journal: Birthright to bring Israeli-American kids to their homeland

The Blaze: ‘The Most Important Video About Israel Ever Made’ was...
Scroll to top