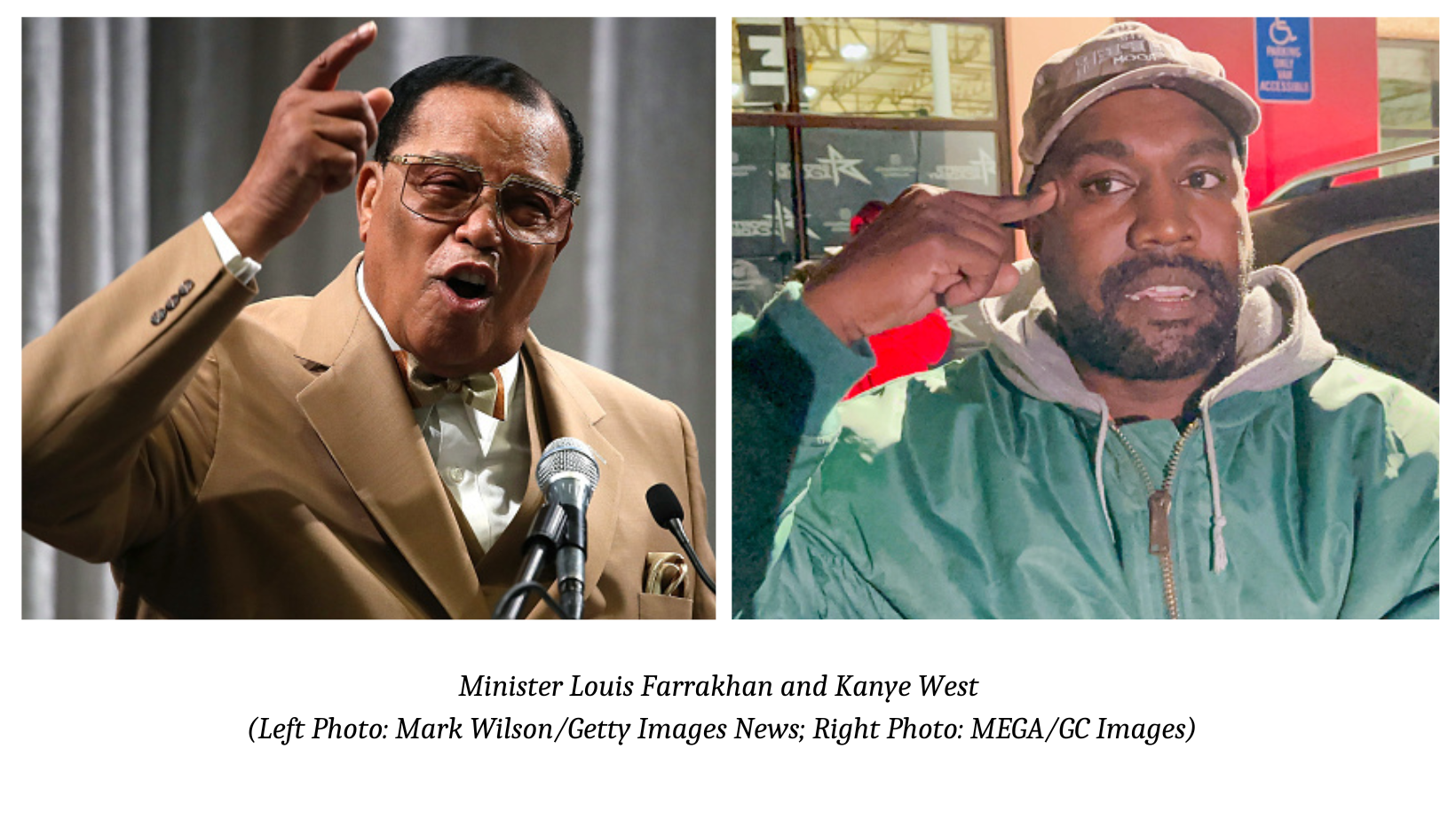 This article was originally published in The Jerusalem Post on November 25th, 2022, written by Adam Milstein.

Farrakhan must be treated as a persona non grata in America. For too long, his poisonous presence and rhetoric have been tolerated.

Over the past 25 years, antisemitism has been growing exponentially in American culture and politics, with an uptick this past month due to the rabid antisemitic remarks expressed by famed rapper Kanye West, newly known as “Ye,” which has been normalized by other African-American icons like Kyrie Irving.

Among the antisemitic tropes expressed by West: Blacks are the real Jews and therefore cannot be antisemitic, Jews are greedy and only watch out for their own at the expense of others, and Jewish Zionists control or have disproportionate influence over media, finance, entertainment and broader American society. Ye has also expressed admiration for Hitler.

While suffering some consequences for his outrageous bigotry, West kept his loyal fan base, who strongly believe he and the black community are being punished for telling the truth. A few days later, NBA superstar Kyrie Irving publicly promoted the pseudo-intellectual film Hebrews to Negroes, steeped in similar antisemitic ideology about fake, impostor Jews and a global Jewish conspiracy for world domination.

As antisemitism, in its most raw forms, becomes more and more mainstream in the African-American community, Americans must not only hold those who spew it accountable but also understand and combat its source and inspiration: Louis Farrakhan.

A protestor carries a white supremacist and antisemitic sign outside the Kenosha County Courthouse on the second day of jury deliberations in the Kyle Rittenhouse trial, in Kenosha, Wisconsin, US, November 17, 2021. (credit: REUTERS/EVELYN HOCKSTEIN)

Observers of antisemitism quickly grasped that West’s antisemitism closely mirrors that of Farrakhan, the longtime leader of the Nation of Islam (NOI) – an antisemitic group that advocates for innate black superiority over whites. For decades, Farrakhan has spewed hateful venom at Jews, alleging that the Jewish people were responsible for the slave trade and that they conspire to control the government, the media and Hollywood, as well as various black individuals and organizations.

He frequently denies the legitimacy of Judaism – or the Jewish claim to the Land of Israel – arguing that “Judaism is nothing more than a ‘deceptive lie’ and a ‘theological error’ promoted by Jews to further their ‘control’ over America’s government and economy.”

Unbeknownst to many, West and Farrakhan have been publicly connected for years. In July 2005, West accepted the “Million Man March Image Award” at the NOI headquarters in Chicago. In 2013, when West first drew attention for antisemitism when he lamented that “Black people don’t have the same level of connections as Jewish people,” Farrakhan defended him and told him not to “bow to pressure to apologize.” Two years later, West took his family to meet Farrakhan, and his song All Day, released that same year, boasted: “Just talked to Farrakhan, that’s sensei.”

What is vital to note is that Farrakhan has an immense following and “may be the most popular antisemite in America” and his “speeches still draw hundreds of thousands of viewers online and his influence reaches millions through regular mentions in news media, popular culture, social media, and more.”

What is so alarming is that Farrakhan’s antisemitic message has appeal across the political spectrum, from the far-left to the far-right, and among radical Muslims. According to Professor Jack Fischel, “Beyond NOI, a web of white supremacists and black nationalists are linked together by online social networks that propagate antisemitic imagery, wild conspiracy theories about the effort of Jews to control America, and other forms of propaganda designed to foster hatred of Jews.”

‘Kanye is right about the Jews’

WE RECENTLY witnessed this extremist cross-pollination in action due to Kanye’s well-publicized, Farrakhan-inspired antisemitic outbursts. On October 22, 2022, members of the white supremacist Goyim Defense League hung a banner over a central Los Angeles freeway reading, “Kanye is right about the Jews,” while they raised their arms making Nazi salutes.

When Kanye talks about blacks being the real Jews, he mimics the beliefs of another black supremacist group, the Black Hebrew Israelites (BHI), whose members are often radicalized in prison by NOI teachers.

The Black Hebrew Israelites claim that they are the descendants of the Israelites of the Old Testament and are the true Jewish people. They depict Jews as usurpers of God’s will, a devilish people who have prevented the black man from realizing his true destiny. This incitement has led to real-world violence against Jews.

As I’ve consistently warned, such antisemitism is not just a danger to American Jews, but to all Americans, threatening our core values of democracy, free speech, and freedom of religion. It is a harbinger of violence and extremism that will affect all Americans, as we saw in December 2021 when BHI-inspired Darrell Brooks rammed his SUV into a Christmas parade in Waukesha, Wisconsin, killing six and injuring over 60.

What is increasingly clear is that while Farrakhan and his black supremacist ilk don’t represent the African-American community nor their fight against hate and racism, these radicals pose a clear danger to America, empowering and inciting extremists across the country.

In response, Farrakhan must be treated as a persona non grata in America. For too long, his poisonous presence and rhetoric have been tolerated. Politicians and celebrities that support or echo Farrakhan and his vile ideology must be held accountable. He and his NOI organs and acolytes must be denied the reach afforded by social media, where he boasts over 350,000 followers on Twitter. To its credit, Facebook banned him in 2019.

Otherwise, we’ll be dealing with the antisemitic and extremist fallout of many more Kanye’s in the years to come.

Adam Milstein on the Importance of the US-Israel Relationship

Adam Milstein: It’s Time to Drop the Iran Nuclear Deal and Strengthen the...
Scroll to top