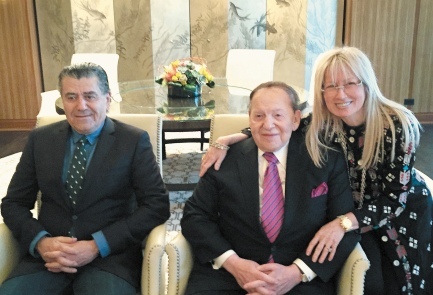 Dr. Miriam and Sheldon Adelson convene Campus Maccabees Summit in Las Vegas, attended by 50 groups, to formulate strategy on how to defeat boycott campaign against Israel • Adelson: We must be united. Time has come to initiate and stop reacting.

Everyone who asked American Jewish businessman and philanthropist Sheldon Adelson over the weekend the question of how the boycott campaign against Israel could be defeated received the same answer: "Cooperation."

On Friday, Adelson and his wife, Dr. Miriam Adelson, convened the Campus Maccabees Summit at The Venetian hotel in Las Vegas involving around 50 different groups engaged in the fight against the Boycott, Divestment and Sanctions movement, which has become very active on American college campuses over the past decade.

To consolidate forces, Adelson invited a number of Jewish philanthropists to Las Vegas for the summit, including Israeli-American businessman Haim Saban, who, as the owner of Partner Communications, has felt the sting of the boycott campaign against Israel in recent days with the Orange saga, which he called "pure anti-Semitism." The alliance between Adelson and Saban carries great symbolic significance in terms of unity, given their different political outlooks.

"We might not vote the same in the 2016 presidential election, but when it comes to Israel, Sheldon and I speak the exact same language," Saban told Israel Hayom.

Adelson said, "The fact that he is a Democrat and I'm a Republican has no meaning in this matter. Two or three years ago, I started working with Saban to expand the Israeli American Council and I got to know him better. In this story, there is only one thing that stands before us: our love for Israel and the war against the boycott against it. This is not political."

Adelson hopes that the summit will lead to there being more "boots on the ground" in the fight against the BDS movement. "We are losing the war against the boycott because this is a war we can't fight alone. We must not forget what led to the destruction of the Temple. This time, we must be united."

According to Adelson, the work must be divided among three groups: the philanthropists providing the finances, the activists operating on the ground and the suppliers (i.e., research firms) giving information to the activists.

Adelson hopes to streamline the anti-BDS effort and make it more efficient.

Disturbing data presented by well-known American Jewish pollster Frank Luntz showed that 37% of American Jewish college students have experienced anti-Semitism and only 28% of all American college students believe "America must stand by Israel's side." The trend is even more negative among students who are Democrats, with 53% believing the Palestinians want peace more than the Israelis do.

The situation is better among right-wing voters in America, Luntz explained. The problem, he said, is that liberal Americans view Israel, not the Palestinians, as the problem. "On campuses, we lost the Left and the women," Luntz said, also noting that the word "Zionism" has taken on a negative connotation on college campuses. Instead of "homeland for the Jewish people," the word "Zionism" is now associated with "racism" and "occupation."

So how can the BDS movement be fought? Some believe Israel needs to tell its story (the history of the Jewish people) better and more proudly. Others think Israel should emphasize what is has to offer (i.e., democracy, nightlife and normality, like other Western countries). And this is what the summit was about — formulating a strategy and not wasting energy. "The situation is not great, but there is no panic," Adelson said. "We organized this summit quickly to not waste time, as summer vacation is coming, and otherwise it would have been postponed to September or October."

The summit dealt with how to mobilize Jewish students, many of whom prefer to watch from the sidelines, choosing to hide their Jewish identities, either due to the media blitz against Israel, fear or simply because they do not want to defend Israel. There is also the problem posed by Jewish leftist groups that help fuel the BDS movement. Many young people I spoke with over the weekend in Las Vegas talked about the difficulties presented by such groups.

At the same time, it was also encouraging to meet Muslims who support Israel. A prominent participant in the summit was Kasim Hafeez, a British Muslim of Pakistani origin who grew up in a family very hostile to Israel. He himself was an anti-Israel activist and was involved in the boycott campaign. "I became interested in the story and saw how those attacking Israel were telling tales," Hafeez told me. "Their activities are based on lies. I came to the U.S. and joined Christians United for Israel. I take criticism and invective from Muslim students who see me as a traitor." Hafeez said his parents have disowned him due to his views. "No, this does not affect me," he said. "I'm continuing with my way and I know it's true. I see the human rights situation in Muslim countries and I see the situation in Israel, and the criticism [of Israel] is simply ridiculous."

At the summit, I also met another CUFI representative, Dumisani Washington. "I explain to students that the only paradise for Christians in the Middle East is Israel," Dumisiani, an African American, said. "At least [in Israel], the number of Christians has increased, in contrast to the situation in its neighbors. For me, it is easier to talk to them about the absurd comparison between Israel and South Africa during the apartheid era. I tell them that I'm the descendant of slaves. I know what racism is. My ancestors felt it and lived it. Israel is not apartheid. Israel is the victim. For the sake of a lie, they have changed the story, and we are working to bring back an accurate [portrayal of the situation]."

Adam Milstein, one of the founders of the Israeli American Council and an organizer of the summit in Las Vegas, was very enthusiastic about the start of the new campaign against the BDS movement, calling it a "historic" moment. "Everyone has decided to mobilize together for the same cause," he said. "The unity produced here excites me greatly. It is very uplifting to see 50 different groups coming together on behalf of Israel and against BDS."

Milstein said the message from the philanthropists to the groups was, "You work together and we will raise you the money. You no longer have to worry about financing and fundraising. You just need to be united. The reason we have not succeeded until now on campuses is we were not united."

Shawn Evenhaim, the board chairman of the Israeli American Council, was very pleased with the Las Vegas summit. "Something new happened here over the weekend," he said. "There is a lot of will, a lot of talent and a lot of positive energy. The direction is positive."

Summit attendees noted that history had been made. "The boycott of Israel came upon us like a tsunami and therefore we need to initiate, not just react," Saban said. "Miri and Sheldon, along with Milstein, decided to mobilize everyone, and we all have an interest in Israel. Everything here is positive."

Talking about anti-Semitism in America, Saban said, "Although only 10% of Americans are anti-Semites, remember that is 33 million people. So we must be aware of this. We must show the public the real Israel."

Adelson said that the anti-Zionist wave on campuses stemmed from the same anti-Semitism he saw when he was young. "The situation is not burning, but it is better to act sooner rather than later. The time has come to initiate and stop reacting. Now what is important is the result."