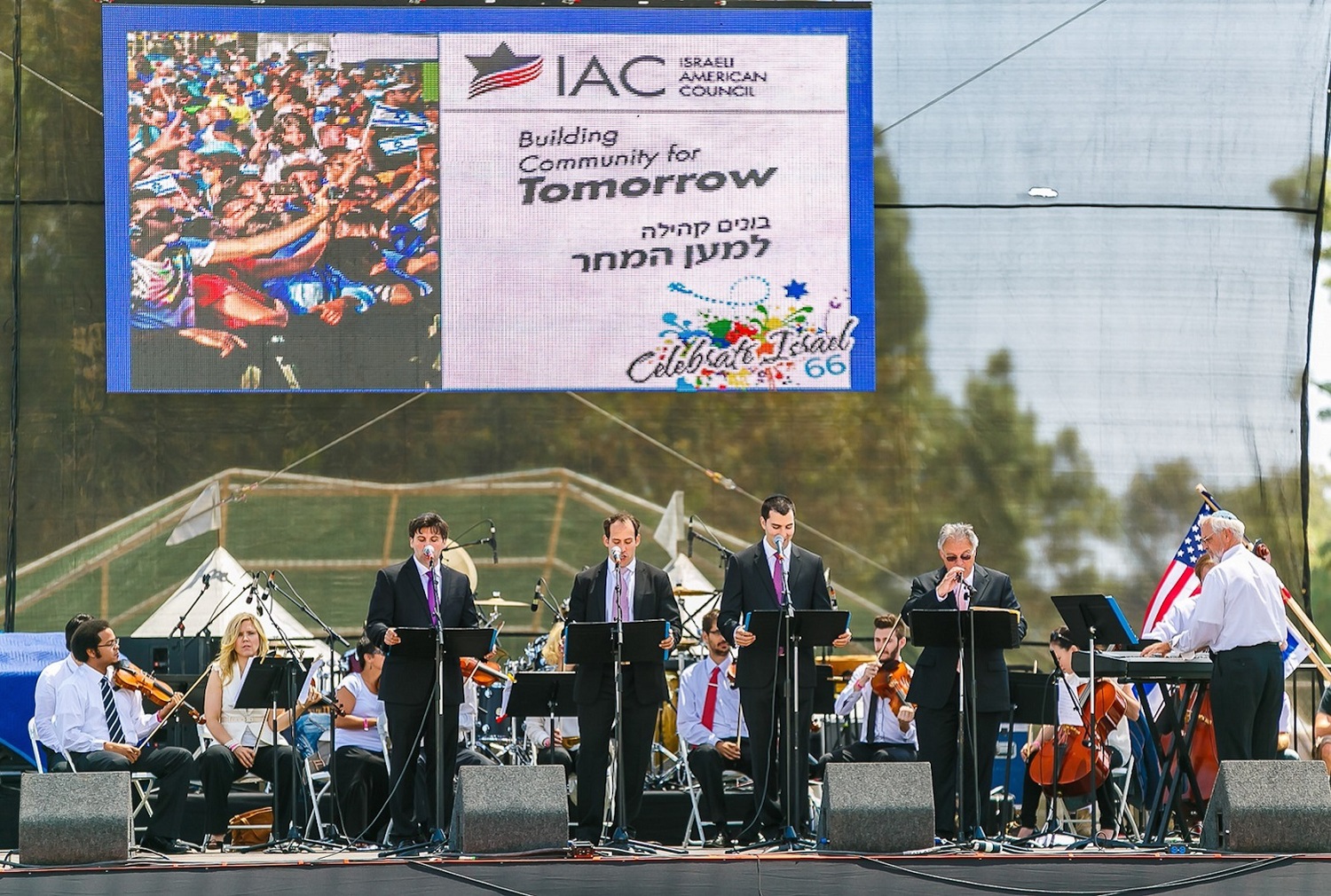 The so-called “alphabet soup” of American Jewish organizations covers seemingly every communal concern and interest group. Yet despite their direct connection with the Jewish homeland and firsthand knowledge of issues prioritized by American Jews, Israelis living in the United States have historically been both neglected and unorganized.

But the fast-growing Israeli-American Council (IAC), which was founded in Los Angeles in 2007 and started expanding nationally in 2013, is working to change that. This year, IAC’s own programming has reached more than 100,000 of the estimated 500,000-800,000 Israeli Americans, and another 50,000 Israeli Americans have participated in programs sponsored by IAC.

IAC’s stated mission is “to build an active and giving Israeli-American community throughout the United States in order to strengthen the State of Israel, our next generation, and to provide a bridge to the Jewish-American community.” Its growth plan since last year has been twofold. First, to open regional offices in areas with large Israeli American populations—recently launched offices include Boston, Florida, New York, New Jersey, and Las Vegas, on top of the initial Los Angeles office. Second, in areas not served by its regional offices, IAC sponsors programming in places like Chicago, Philadelphia, Cleveland, and Dallas.

From Nov. 7-9, IAC will hold its inaugural national conference, “The Israeli-American Community: A Strategic Asset for Our Future,” in Washington, DC.

“[IAC is] a welcome and important development,” Brandeis University professor Dr. Jonathan Sarna, a leading expert on American Jewish history, told JNS.org. “We’ve seen a similar effort on the part of Jews from the former Soviet Union, where similarly there have been organizations like the Genesis Philanthropy Group that seek to work with Russian-speaking Jews to preserve culture and to really allow them to preserve their identity going forward.”

“For a long time, Israelis in the United States did not similarly organize—different from [the strategy of] all other Jewish immigrant groups in the United States—and the reason was that whereas the other immigrants had left countries where Jews were persecuted and the Jews had no intention of returning to those countries, Israelis often argued that they were here only for a short time, that they hoped to return, and they did not organize in this way,” Sarna explained.

So what has changed?

“With Israel under attack, from BDS (the Boycott, Divestment and Sanctions movement) and the like, it’s easy to understand why those American Jews who have roots in Israel and know it best feel that they want to organize, in part in order to defend it, in part in order to promote their own identity as Israeli Americans,” said Sarna.

Adam Milstein, one of IAC’s founders and president of The Adam and Gila Milstein Family Foundation, agrees.

IAC-affiliated programming connects with Israeli Americans at all phases of the lifecycle. Sifriyat Pijama B’America—the mirror image of Jewish philanthropist Harold Grinspoon’s PJ Library—sends free Hebrew-language books on a monthly basis to Hebrew-literate families across the U.S. Sifriyat Pijama will reach 15,000 families this year, according to Milstein, who explained that the goal is ensuring that the Hebrew language is spoken at home, as well as partnering with schools, JCCs, and synagogues in order to introduce Israelis to American Jewish life.

At the college level, IAC’s Mishelanu (meaning “of ours”) program serves Israeli students at 33 schools who are not fully comfortable with the programming of other campus groups. IAC also supports the Tzofim (Israel Scouts) youth movement, which offers programs for ages 10-18. For all ages, IAC runs the “Celebrate Israel Festival” to mark Israeli Independence Day in all of its regions. The 2014 Celebrate Israel Festival in Los Angeles drew 15,000 attendees.

Milstein explained that while American Jewish institutions typically seek membership fees, Israelis are accustomed to receiving Jewish communal services such as synagogue membership and schooling for free. When Israelis didn’t want to pay for those services in the U.S., Jewish organizations typically “disengaged” from Israelis unless they were donors, said Milstein.

“We (IAC) take a different approach,” Milstein said. “We’re investing in our community. We provide free services to every group, whether it’s educational or cultural or Jewish outreach. Everything we do is subsidized or free, and we’re engaging [Israelis] with no strings attached.”

For Milstein and others involved with IAC, the endeavor is highly personal.

Milstein came to America in 1981 with his wife and two daughters, earned a Master of Business Administration, and worked in commercial real estate. He didn’t started his life in the U.S. attending synagogue but said he had a “wake-up call” when his daughters started to date non-Jews. When asked why his daughters should make a point to date fellow Jews, Milstein found himself without a good answer.

“I knew that unless I made a change for myself and tried to understand those issues, I wouldn’t be able to keep [my daughters] Jewish,” he said.

Milstein connected with the Aish HaTorah outreach organization and started becoming more involved with Jewish life. His daughters both married Jews. Aish would introduce him to Israel advocacy organizations such as AIPAC, laying the groundwork for his eventual philanthropy and involvement with IAC’s founding.

“I felt that [IAC] was going to be a channel for me to really tell my story and convince other people to send their kids to Jewish education, and to be more philanthropic, and to help Jewish identity and the state of Israel,” he said.

Like Milstein, Rani Ben-David, the IAC’s Florida chairman, cited his children as motivation for his involvement with the organization.

“[My two children] are Americans, they were born here, and their kids are definitely going to be American, so [this work is] just to keep that Israeli inside them, to have them keep loving Israel,” he told JNS.org. “If you look at the Jewish federations, and the American Jews, you see that they have a lot of love for Israel, and I think you want to keep that also with the Israeli kids.”

Yehudit Feinstein-Mentesh, IAC’s regional director in New York, recalled that when she became a mother five years ago, she “suddenly felt a sense of loss and a sense of ‘What am I doing here?’”

At Brooklyn-based Congregation Beth Elohim, Feinstein-Mentesh’s employer at the time, Rabbi Andy Bachman encouraged her to make the synagogue a meeting place for Israelis. “I started a Google group and started to volunteer and run different events, and so many Israelis started to come,” said Feinstein-Mentesh, who founded an organization called Israelis in Brooklyn.

While Israelis in Brooklyn “built an amazing, thriving, strong community” of Israeli Americans, she said, the group still found itself without the support system it desired.

“I was creative enough to create programs and find funding, but I never had the ability to find these people in the Israeli community who would be able to support us, and I always had to go to the Jewish American foundations for support,” Feinstein-Mentesh told JNS.org.

When she applied for an IAC grant to support Israelis in Brooklyn, Feinstein-Mentesh recalled that approaching an Israeli non-profit for the first time was like “talking with your family… I really felt that they were taking care of me.”

Instead of the grant, she got her job with IAC.

“[My path to IAC] started from a very personal need and a very personal story, that I realized that I’m not alone, that there are thousands of people like me that are craving different things,” said Feinstein-Mentesh.

While advancing its own goals, IAC is placing a priority on partnering with the American Jewish organizations that preceded its existence. In Boston, the IAC-supported Mitchabrim initiative has hosted discussion groups to foster connections between organizations. One session focused on how to better welcome an Israeli newcomer to the community.

IAC’s Boston office also works closely with Combined Jewish Philanthropies, the local Jewish federation. During this summer’s Gaza war, Israelis understood “that we have to do something, to have an organized rally, and that it meant going outside on the street” rather than just holding indoor rallies, said Na’ama Ore, IAC’s Boston regional director.

After drawing 1,200 people at an initial pro-Israel rally during the war, a second rally that IAC promoted in partnership with the Jewish federation involved about 115 organizations and attracted 3,500 attendees.

“Besides building the Israeli community here, we definitely understand the need to merge and to see where we can collaborate with the federation,”Ore told JNS.org.

“We are not trying to exchange other organizations [for ourselves],” Feinstein-Mentesh said.

“I see it as a very important thing to build that one community, that we’re all together,” said Ben-David.

While the IAC works to better integrate Israelis into American Jewish life, its existence also comes at a time when Israeli ex-pats are increasingly accepted by their countrymen back home.

“It was certainly true in the early decades of the state, when there was a great desire to enhance the [Israeli] population and to promote aliyah, that those who left Israel were portrayed negatively,” said Brandeis’s Sarna. “Today, there are so many Israelis who have lived for part of their lives in America, and with the rise of globalization so that an Israeli in America can constantly be in touch with developments back in Israel through email, through Skype… the sense that one who leaves Israeli is abandoning Israel I think is no longer proper, and I think Israel itself understands that it is far better to ally with Israelis in the United States than to criticize them.”

Similarly, Ore said that while for many years leaving Israel was “kind of betraying the country,” the Israeli government now recognizes “that Israeli Americans can be an asset for the country if we are organized as communities.”

“We’re succeeding, and [U.S. Jews are] taking note that we’re a power in the Jewish community in America,” Milstein said.

Haaretz: Proud to be Israeli-Americans – in the U.S.

The Jewish FORWARD: Sheldon Adelson Is a Philanthropist Like No Other
Scroll to top