Newsroom - Jews Must Be the Brave Eagle, Not the Sacrificial Canary in the Battle Against Antisemitism 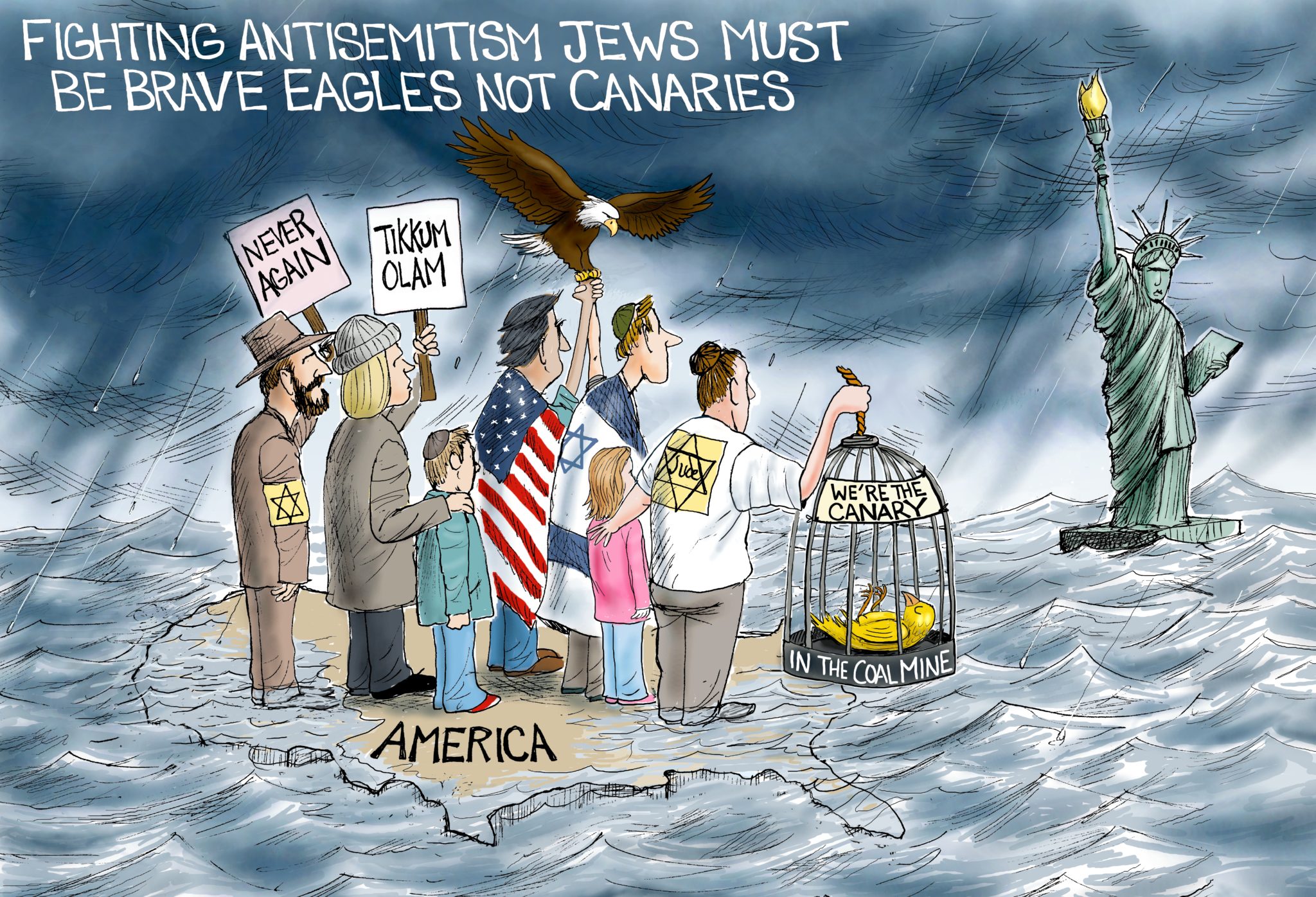 Jews Must Be the Brave Eagle, Not the Sacrificial Canary in the Battle Against Antisemitism

This article was originally published in Newsweek on July 10, 2020.

For decades, Jews living in the diaspora have spoken about the Jewish community as the metaphorical “canary in the coal mine.” This metaphor accepts the notion that Jews are powerless victims, sacrificed for the benefit of others. Using the powerless canary to symbolize Jews reveals a deeply flawed mindset that paralyzes us from properly taking brave action and defending ourselves.

The canary in the coal mine is a practice that dates back to the early 1900s. British miners utilized the sensitive and vulnerable canary to detect high levels of carbon monoxide and toxic fumes. If the canary, helplessly locked in a cage, fell dead, the workers knew they were in danger and would flee the mine. In short, the canary was a dispensable sacrifice for the benefit of everyone except for the canary itself.

We, the Jews, are not an expendable alarm system for others and should not see ourselves as such. If we hope to survive and thrive, we cannot afford to be defenseless. We must change our approach to go on the offensive and join other groups in the fight against the dangers all Americans face, rather than hold onto the mantle of victimhood, vainly hoping others will fight for us.

True enough, the amplification of Jew-hatred is a warning sign for all, but our embrace of the role as a disposable canary for others is counterproductive. Non-Jews are not the ultimate defenders of the Jews; we are. Waiting for others to stand up for us is futile and, in the meantime, anti-Semitism continues to intensify and suffocate our community. We are very familiar with statistics that show a stark rise in anti-Semitism; it’s time we take it upon ourselves to stand up and fight back.

Jews throughout America experience hate and violence daily from radical movements—the far Left, the far-Right, and radical Islam. It’s important to demonstrate to all Americans that these movements not only aim to harm Jews but also threaten to destroy our Judeo-Christian principles and our American way of life.

Hate and violence targeted at the Jewish community are the training fields for a larger attack on the foundations of America: our freedom of religion, freedom of speech, equality, and pluralism.

So as the perfect storm of anti-Semitism brews against the Jews and Americans, we must reject our historical role as helpless victims, the canaries in the coal mine.

Fortunately, we have exemplars we can look to who courageously overcame the specter of Jew-hatred. Visionary Zionist leader David Ben-Gurion embodied this proactive approach. He encouraged his fellow Jews not to remain passive in the face of aggression and called on them to organize for self-defense and to go on the offensive against centuries-old hate.

With the outbreak of World War I, he joined the Jewish Legion, the first Jewish military force in nearly two millennia, established by Zeev Jabotinsky, which fought under the British to end Ottoman rule over the Land of Israel.

Ben-Gurion was instrumental in the re-establishment of the Jewish state and the promise of a Jewish future. In 1948, he declared the state of Israel’s independence despite the majority of Jewish leaders fearing that neighboring Arab states would annihilate them. And yet, against all odds, the Jewish people were able to defend Israel and create a prospering country.

Like Ben-Gurion, we must transform our approach from the defenseless, sacrificial canary to the robust, visionary brave eagle—or nesher, in Hebrew. It is no coincidence that this regal bird, described as a selfless guardian in the Hebrew Bible, was adopted as the national emblem of America in 1782.

To transform from the canary to the eagle, there are three principles we must adopt.

First, embrace and support Israel without preconditions. Israel is the ultimate shield—not only for the Jewish people but also for the Western world—and is one of America’s strongest allies. She safeguards us, protects our shared interests, and promotes the universal values of freedom and liberty.

Second, leverage our resources to strengthen American Jewry and influence the trajectory of anti-Semitism. The American-Jewish community is one of the most successful immigrant communities in the world. We do not need to be passive and wait for society’s toxins to destroy us. We must deploy our financial resources, leadership, and influence to reshape the fight against anti-Semitism and help lead our country forward through these perilous times.

Third, support and expand existing projects and platforms that fight back against Jew-haters and extremists and force them into retreat. Additional resources must be invested in research and capabilities that allow us to collect information on the drivers and network of hate, so we can take decisive action at the right time and right place.

Like the eagle, leadership, courage, resiliency, and strength are qualities that should define us. We must stop being reactive and look over the horizon to detect threats before they occur. We must be visionaries of a free and bright future and not wait for the inferno of hate to consume us. The future of America, American Jewry, and the civilized world order depend on it. Like the young American nation adopting the biblical eagle as its symbol, we can serve as inspiration for our country, this time to sweep back the radical forces of darkness.

Adam Milstein is an Israeli-American philantropreneur. He and his wife Gila co-founded the Adam and Gila Milstein Family Foundation, providing charitable and philanthropic services to a wide range of organizations to strengthen the Jewish people and the U.S.-Israel relationship, as well as combat bigotry and hatred in America. He can be reached at [email protected], on Twitter @AdamMilstein, and on Facebook at www.facebook.com/AdamMilsteinCP.

The views expressed in this article are the writer’s own.

Hadassah Magazine: We Must Act Now to Fight Antisemitism
Scroll to top