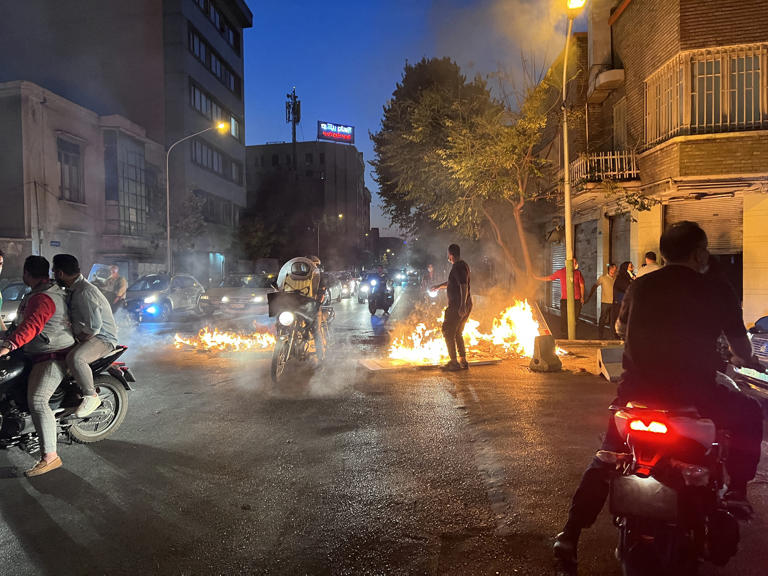 This article was originally published in the MSN Tribune News Service on October 20th, 2022, written by James Jay Carafano and Adam Milstein, The Heritage Foundation.

Despite weeks of brutal repression, ordinary Iranians of all ages and all sections of society, and from all regions, continue their mass protests, calling for an end to the Islamic Republic’s rule. Their message is unmistakable. The Iranian Revolution has failed. The regime it spawned is doomed. The only question left for history to answer is: When will it fall? 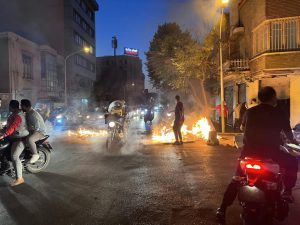 A picture obtained by AFP outside Iran, reportedly shows objects lit on fire in the capital Tehran, on Oct. 8, 2022.© AFP/Getty Images North America/TNS

While women and girls have been most visible on the frontlines, the sheer number of protesters suggests that dissatisfaction with the regime is rampant across all demographic groups. The uprising has reportedly spread to 177 cities, making it the largest and most sustained stretch of civil unrest to grip Iran since 2009. The persistence and resilience of the demonstrators is stunning — especially in view of the fact that the action in the streets is largely leaderless, without any national organization coordinating matters.

Nor is the resistance limited to just disaffected minorities. It may be no surprise that protesters in Iran’s Kurdistan province are shouting “Death to Khamenei,” but the same chants are echoing in the streets of Tehran’s downtown bazaar. Estimates are that more than 400 people have died, including many young boys and girls, and more than 20,000 have been detained. Yet the protests show no signs of abating, despite the government ordering a full-scale military response.

All of this unrest is irrefutable evidence that Iranians are captured people, incarcerated within their borders by their own leaders.

So, when will the regime be swept aside? The surest answer history has to offer is that, when security forces in the street refuse to fire on the crowds, the regime’s days are numbered. Still, when will that day be? All we can say for sure is we will all, Iranians included, likely be surprised.

The reason for that is well-explained in Natan Sharansky’s book, “The Case for Democracies.” Sharansky notes that a defining characteristic of authoritarian governments is that they hold power, not just through the use of brute force, but by restricting information. Even many in the regime don’t know how the regime is faring. In the absence of transparency, they are unable to judge any better than outsiders how tight a hold they have on power.

As a result, we will all wake up one day shocked to find the Iranian government collapsing faster than the Washington Nationals.

Today, all we know is that the Iranian regime is a corrupt, bankrupt and illegitimate spent force, that it won’t and can’t reform, and that the people of Iran are done with their dictators. We don’t know when the end will come or what it will look like after. Which raises the big question: What should America do about it?

The U.S. government should never embrace regime change as an instrument of foreign policy. In the end, it is not our duty or responsibility to dictate to other people how to govern themselves. Americans can best defend American interests by safeguarding them against the malicious actions of others. At the same time, the U.S. can and should show its support for the Iranian protesters by offering words of solidarity and helping to provide access to the internet, popular social media channels and uncensored news.

There are other prudent actions that Washington should take to prepare for a future where the Iranian Revolution is just another failed human experiment in oppression.

For starters, Washington ought to do nothing to prop up a collapsing dictatorship that also sponsors terrorism worldwide. That means dropping all efforts to revive the Obama-era Iran deal, which has zero prospects of preventing Tehran from getting a nuclear weapon, yet promises to net the regime more than $1 trillion with which to continue its reign of terror.

Instead, the U.S. should double down on isolating, sanctioning and punishing the regime for its many human rights abuses and atrocities. Iran has consistently shown that it cannot be trusted. The only language it understands and responds to is strength.

Further, Washington should be a stronger partner for developing a more resilient Middle East, one prepared to keep the region from falling into chaos in the aftermath of the Iranian regime’s collapse. The U.S. has a ready instrument in the Abraham Accords. The agreement is more than a framework for normalizing Arab-Israeli relations. It is also a tool for economic, political, and diplomatic cooperation and integration. America should also continue to bolster Israeli deterrence and encourage stronger Israeli-Arab alliances in order to ensure its security interests in the region.

When the Iranian regime is dragged down, it will take a stronger, more secure Middle East to stem the flood of discord and uncertainty that will follow. Now is the time for America to start laying the groundwork.

Why I think the Golden Age for Jews in America is coming to its end – opi...