Newsroom - Commemorating the 40th anniversary of Israel’s July 1976 Raid on Entebbe: The State of Israel ensures that “Never Again” remains a reality 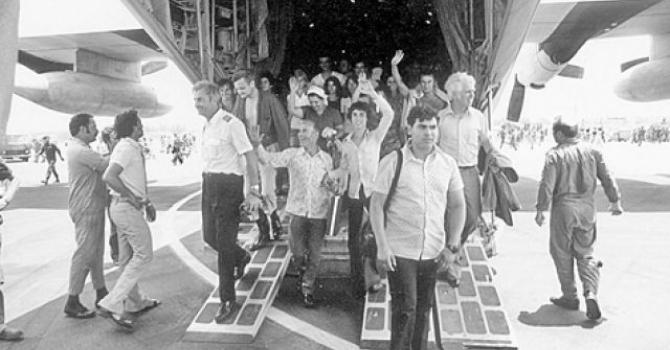 Commemorating the 40th anniversary of Israel’s July 1976 Raid on Entebbe: The State of Israel ensures that “Never Again” remains a reality

Seventy years ago, in the wake of the Holocaust, the Jewish people took a vow: Never Again!

After the Nazis murdered six million Jews, we came to recognize that we only have ourselves to rely upon for our defense. In today’s tumultuous world, the sole guarantor of Jewish safety is a strong Israeli military. Jews around the world facing mortal danger can count on the State of Israel to protect them.

This year commemorates the 40th anniversary of the July 1976 Raid on Entebbe, when Israel demonstrated what Never Again really means. After an Air France plane with about 300 passengers traveling from Israel to France was hijacked by terrorists and brought to Uganda, the Israeli and Jewish passengers went through a Nazi-like selection process and were kept as hostages while the non-Jews were set free to return to Paris.

The terrorists declared that they would kill all the hostages if their demand for the release of 53 international terrorists, held in Israel and other countries, was not met. Yet it was only the State of Israel that chose to take action and save the Jewish captives. Israel refused to accept the execution of Jews by the terrorists, and in a daring and carefully planned mission, Israeli forces used four American Hercules C-130 cargo planes, travelled 2,400 miles and rescued the hostages. One IDF officer, Lieutenant Colonel Yoni Netanyahu, brother of current Israeli Prime Minister Benjamin Netanyahu, and three hostages were killed. More than 100 were saved.

But this is not the only time in recent history that only the people of Israel were willing to put their own lives in harm’s way to protect their brothers and sisters in other parts of the world. After a lethal pogrom in Yemen in 1947 after the U.N. vote to partition the British Mandate of Palestine, Israel secretly airlifted 45,000 Yemenite Jews to safety in Israel with Operation Magic Carpet. And again with Operation Solomon in 1991, the IDF airlifted 14,500 Ethiopian Jews out of harm’s way in Africa to Israel. With these incredible rescue missions, Israel has made it clear that it will do whatever it takes to protect global Jewry.

Again and again, the Jewish people have been targeted. Yet now, the State of Israel, the homeland of the Jewish people, is here to step in and stand by those in danger. After the collapse of the Soviet Union, Israel resettled more than 1 million Soviet Jews in Israel. Jews around the world, wherever they are, can rest assured that their brothers and sisters in Israel are there to protect them. The IDF is there to ensure that the Right of Return of the Jewish people in any corner of the world is protected, from Ethiopia, to Russia, to Yemen. In addition to serving as the homeland for the Jewish people, Israel is here to extend its arms and ensure that Never Again remains a reality.

Before Israel’s founding in 1948, Jews were easy prey to the world’s terrorists. They could run but they were never completely safe. Not anymore, Never Again! Thanks to its strength, the Israel Defense Force is fulfilling its true purpose—to serve as the ultimate insurance policy for the Jewish people against our enemies.

We saw this powerfully displayed again in 2003, when three Israel Air Force (IAF) F-15 Eagle fighter jets, piloted by descendants of Holocaust survivors, took to the skies, soaring over the 40 square kilometers of Auschwitz where Nazis slaughtered more than one million Jewish men, and women, and children only 70 years ago. Below the IAF jets—on the very ground where so many Jews lost their lives—stood hundreds of IAF commanders singing the Israeli national anthem, “Hatikva.” (You can watch the powerful video of the Israel Air Force flyover at Auschwitz here.)

If history has taught us anything, it is that others will try to annihilate the Jews again in the future. But whenever the next time comes, we will not be helpless. Israel, with all its might and determination, is not going anywhere. It will do whatever is necessary to eliminate threats posed by those who seek the Jewish people’s destruction.

In the early 1930s, people across the world—including many of the most successful and assimilated Jews in Europe—wrote off Adolf Hitler’s anti-Semitism, believing that he would never actually act on his words. Little could they imagine the disaster that would be brought upon the entire world by Hitler’s madness just a few years later, leading to the death of tens of millions and the destruction of half the world.

If Hitler’s intentions had been taken more seriously early on, he could have been stopped. The Holocaust is further evidence that Jews are the proverbial canary in the coal mine. When Jews are persecuted, slandered or unfairly singled out, it does not bode well for others. While Jews are often the first to be targeted by tyrants and bigots, it almost never ends with the Jews.

Remember that the next time you hear the news about an IDF military operation. When Israel goes to war, it is not doing so just for its citizens or Jews around world. When Israel fights, it does so on behalf of Western civilization as a whole. Israel is the floodgate—it sits on a strategic fault line between enlightenment and tyranny.

We will soon be without any Holocaust survivors who can provide us with direct personal accounts of the horrors they suffered. But the lessons of the Holocaust are more relevant than ever and they must be passed on to future generations.

This month, we lost one of the great bearers of those lessons, Elie Wiesel, who said of this cause, “without memory, there would be no civilization, no society, no future.”

As Elie Wiesel often shared, one of the most important ways to safeguard the memory of the Holocaust is to strengthen and support Israel. The Jewish state stands as a vivid rejection of everything the Nazis believed in. As long as the Jewish people can defend ourselves by ourselves, we will flourish and prosper for generations to come. And so will the world.