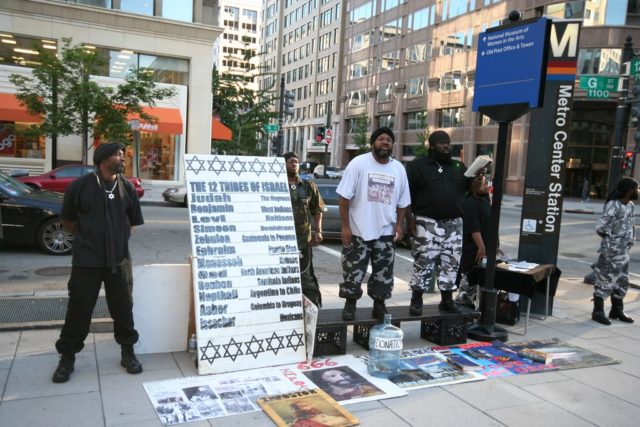 This article was originally published in the Jewish Policy Center on January 6th, 2023, written by Adam Milstein

At a summit held by the Anti-Defamation League (ADL) in November, FBI Director Christopher Wray spoke about “the tragic reality that the Jewish community uniquely ends up on the receiving end of hate-fueled attacks from all sides.” He referenced the white supremacist attacks in recent years in Poway and Pittsburgh, and the 2022 attack at the synagogue in Colleyville, Texas, motivated by “violent Jihad”. But it’s not just white supremacists and radical Muslims.

There are myriad of groups espousing Jews-hatred – the far-right, the far-left, radical Muslims, and black supremacists, such as Louis Farrakhan, to name a few. The reality is that these groups and their individual members and supporters pose a danger not only to the Jewish community, but to all Americans. Antisemites target Jews first, as they see the Jewish people as easy prey, but what they are really after is changing America beyond recognition, according to their distorted and extreme ideologies.

The tragic reality is that America as a whole is on the receiving end of hate-fueled attacks from all the radical elements of society. The fabric of America is disintegrating in front of our eyes at the hands of the sworn enemies of the American and the Jewish people.

The Mounting Threat for Jewish Americans

In recent years, the threat against American Jews, and consequently the American people, has been mounting. Per FBI Director Wray, “A full 63% of religious hate crimes are motivated by antisemitism—targeting a group that makes up just 2.4% of our population.”

Interestingly, this hate is one of the sole common threads between far-right, far-left, radical Muslim, and black supremacist ideologies. These groups are united by familiar antisemitic tropes of a nefarious and powerful Jewish or “Zionist” cabal that allegedly seeks to dominate and subjugate individuals, societies, and nations through behind-the-scenes scheming.

More and more, these hate groups, who at their core are enemies to each other, are coalescing and cooperating in their hatred of the Jewish people and the Jewish State.

How did we arrive to this point, and is Antisemism just a Jewish problem?

The Threat from the Far Right

Jew hatred from the far-right has grown in recent years with the popularization of the Great Replacement conspiracy theory, in which Jews are commonly held responsible for a plot to subjugate if not eliminate the white race through promotion of non-white mass immigration, feminism, transgenderism, and other supposedly devious schemes.

Hence, at the notorious white supremacist “Unite the Right” rally held in Charlottesville, Virginia in August 2017, marchers feverishly chanted, “Jews will not replace us”.

Within the year, this unfolded into real world violence against Jews. In March 2018, 46-year-old white supremacist Robert Gregory Bowers killed 11 Jews at the Tree of Life synagogue in Pittsburgh, Pennsylvania during Shabbat services, the deadliest attack on Jews in America’s history. Blaming the Jews for mass migration to the U.S., Bowers posted on social media before the attack, “I can’t sit by and watch my people get slaughtered. Screw your optics, I’m going in.”

A little over a year later in April 2019, 19-year-old John Timothy Earnest burst into the Chabad of Poway synagogue outside San Diego, killing one congregant in a burst of gunfire, again during Sabbath services. In his manifesto, Earnest wrote, “Every Jew is responsible for the meticulously planned genocide of the European race. They act as a unit, and every Jew plays his part to enslave the other races around him—whether consciously or subconsciously.”

As I’ve warned, the Jews were just the first, most attractive target. Soon these attacks spread to the rest of America. In August 2019, a far-right shooter targeted Latinos in an El Paso, Texas Walmart, killing 23. In May 2022, a far-right shooter targeted black Americans at a supermarket in Buffalo, New York, killing 10. Both cited the “Great Replacement” theory as motivations for their attacks.

The Threat from Black Nationalists

Jew hatred doesn’t only come from white nationalists, but also from black nationalists, who since the 1960’s have been advocating for a major national influence through the Nation of Islam (NOI) and their co-hordes through race pride for African Americans and black separatism.

Hatred of Jews has long been brewing in the black community. Louis Farrakhan, the leader of the antisemitic Nation of Islam (NOI), has been a prominent voice in the community for decades.

Farrakhan spews hateful venom at Jews, alleging that the Jewish people were responsible for the slave trade and that they conspire to control the government, the media and Hollywood, as well as various black individuals and organizations. He frequently denies the legitimacy of Judaism – or the Jewish claim to the Land of Israel – arguing that “Judaism is nothing more than a ‘deceptive lie’ and a ‘theological error’ promoted by Jews to further their ‘control’ over America’s government and economy.”

The severity of this problem burst onto the national scene in December 2019, with a spate of attacks against the Jewish community in the New York metropolitan area. On December 10, two heavily armed individuals connected to the Black Hebrew Israelite (BHI) movement murdered three people at a kosher supermarket in Jersey City, New Jersey. Weeks later, on December 28, a BHI-inspired individual attacked a Hanukkah gathering in Monsey, New York with a large knife, killing 72-year-old Rabbi Josef Neumann.

Once again, this hate then reared its head from Jews to the rest of society. In November 2021, Darrell Brooks, a black nationalist drove his SUV into a crowd of Christmas parade attendees in Waukesha, Wisconsin, killing six people and wounding dozens. In April 2022, another black nationalist Frank Robert James perpetrated a mass shooting on the New York City subway during rush hour, injuring 29. James’s online incitement and bigotry included antisemitic diatribes.

Farrakhan’s views are echoed in the recent antisemitic outbursts of famed rapper Kanye West, who now goes by “Ye”. Kanye is now claiming, “Somehow our country has been taken over by, you know, maybe about 300 Zionists.” Farrakhan and Kanye have actually been publicly connected for years, with West referring to him as “sensei” in one of his songs.

When Kanye talks about blacks being the real Jews, he mimics the beliefs of the Black Hebrew Israelites (BHI). While white supremacists say “Jews will not replace us”, BHI followers say they are us. Just this past month, a group of BHI marchers in Brooklyn ominously chanted, “we are the real Jews”.

And now Kanye has united with the far right, bringing white supremacist Nick Fuentes along with him when dining with former President Donald Trump in Mar-a-Lago on November 22.

The “Red-Green” Alliance: The Threat from the Radical Left & Radical Muslims

Not to be outdone, the radical left has been ramping up its Jew hatred for decades, disguising it using hatred for the homeland of the Jewish people, the State of Israel. This radical group new kind of new antisemitism initially gained intellectual currency in universities and other leftist intellectual circles. Today, modern anti-Semitism can be found among members of the radical Left, who are inherently anti-American and  see Israel as a symbol of American and Western imperialism, aggressive military rule and the violation of human rights.

Similarly, radical Muslims have long sought Israel’s destruction and promulgated conspiracies of Jewish Zionist global domination. Despite the fact that radical Muslims and leftists are naturally completely misaligned in their belief systems and ideologies, they have joined forces and as the Reut Group warns, “The strategic partnership between the radical left and political Islam, known as the red-green or Islamo-Left alliance, emerged in Europe, but it has migrated to the US in recent years.” Despite their hatred and intolerance to each other they have a shared agenda that is anti-Western, anti-American, and anti-Zionist.

The New Antisemites Report by StopAntisemitism.org and Zachor Legal Institute in which anti-Zionism or hatred of Israel is utilized as an acceptable stand-in for the classical hatred of Jews documents how this contemporary hate, as disseminated by the Islamo-Left so-called “Boycott, Divestment and Sanctions” (BDS) Movement, is negatively influencing large segments of the United States’ population and creating a dangerous environment that normalizes vilification of Jews, as well as inciting violence against Jews, something that history has shown to have deadly consequences.

The radical left have also been promoting Critical Race Theory (CRT) and the Diversity, Equity and Inclusion (DEI) programs on universities and high schools contributing to antisemitism in the American education system. However, antisemitism is not just a Jewish problem – it is an American problem and while CRT and DEI policies may disproportionately target and harm Jewish students, their agenda ultimately seeks to undermine and replace fundamental American values and replace it with its own radical vision.

The trend of intersectionality has accelerated the Islamo-Left collaboration.

The strange alliance between the radical Left and radical Muslims – two groups that, despite their seemingly incompatible worldviews, happily collaborate against Israel and the Jews, can be explained by the theory of intersectionality adopted by many in the far Left. According to this theory, groups that consider themselves neglected and discriminated against must come together to fight against each of those groups’ supposed enemies.

This new partnership was on full display during the last major conflict between Israel and the Palestinians in May 2021, when terror groups Hamas and Islamic Jihad launched more than 4,000 rockets and mortars at Israeli civilians. Back in America, we witnessed stunning and unprecedented scenes in New York, Los Angeles, and other major progressive urban centers of Jews being assaulted by mobs of anti-Israel activists. This surge of anti-Jewish hate also included harassment, vandalism and online abuse.

Few could have imagined that such a wave of violence against Jews in major American cities would be possible within living memory of the Holocaust. Jews in America often fear walking the streets wearing Jewish symbols, congregating outside Jewish community buildings, or even speaking Hebrew or Yiddish in public. This is a growing threat to American society. Street violence and hate speech is replacing the American principles of reasoned discourse and debate.

Through intersectionality, the Red-Green alliance seeks to replace the universal virtues of tolerance, pluralism, freedom of speech, and rule of law with racialized “anti-racism”, hierarchical critical race theory, discriminatory diversity, equity, and inclusion (DEI) policies, intolerant “cancel culture”, and the censorship of “de-platforming”.

Danger at Our Doorstep

As I’ve repeatedly warned, defining antisemitism as a Jewish problem is a lose-lose proposition. Antisemitism is a threat to America, as it is a harbinger of rising violent extremism that will soon consume us all.

Together, those who foremost target Jews – white and black nationalists as well as the Red-Green alliance of the left and Islamists – are a fundamental threat to America and its values. These radical groups are spearheading efforts to erode the core principles that make our country exceptional, replacing America’s commitment to individual rights and equality, meritocracy, rule of law, tolerance, pluralism, due process, freedom of speech, and free-market capitalism with a racialized and violent world steeped in conspiracy theories and political polarization.

The Jewish people have long been portrayed as the sacrificial “canary in the coal mine”, a powerless creature that will warn others of danger through its demise. But here we are, not a canary, but as an eagle, warning Americans of the looming threats on the horizon. Heed our warnings.

Adam Milstein is an Israeli-American “Impact Philanthropist.” He can be reached at [email protected], on Twitter @AdamMilstein, and on Facebook www.facebook.com/AdamMilsteinCP.

Adam Milstein: It’s Time to Drop the Iran Nuclear Deal and Strengthen the...

The Undeniable Link Between Antisemitism and America’s Decline – Op...
Scroll to top