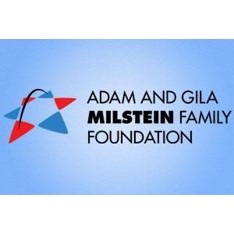 (Los Angeles) – This month, Adam Milstein, the co-founder of the Adam and Gila Milstein Family Foundation, will become the Chairman of the National Board of Directors of the Israeli American Council (IAC) during the organization’s annual conference, which will take place in Washington, DC from October 17-19. The IAC’s new leadership announcement comes at a moment of significant expansion for this national movement, which has grown in recent years to include nine interstate regional offices and a significant membership presence across the country.

“I am honored to become Chairman of the IAC’s National Board at this exceptional moment of growth and opportunity for our organization,” said Adam Milstein. “Israeli-Americans are involved and engaged as a community like never before. The IAC is leading a movement that has incredible potential to strengthen the U.S.-Israel alliance, safeguard the Jewish State, and bolster the Jewish people in America – and well beyond.”

“As a co-founder of the IAC, Adam has played an instrumental role in our organization’s success over the past eight years, driving our outreach efforts across the country,” said Shawn Evenhaim, National Chairman of the IAC. “I know that Adam will bring his exceptional leadership, passion, and vision to the IAC Chairmanship.”

In the week following Adam Milstein’s appointment to Chair of the IAC, Gila and Adam Milstein will be honored with the Humanitarian of the Year Award by the American Friends of Magen David Adom (AFMDA) in recognition of their outstanding philanthropic work and continued dedication to making the world a better, safer place. They will receive the award on October 22nd in Los Angeles at the “Red Star Ball” – a gala event featuring a special guest appearance by comedian Jerry Seinfeld.

“As a nurse in Israel, I saw firsthand the great importance of Magen David Adom. MDA’s state-of-the-art emergency response capabilities are critical for a country like Israel, which is under constant threat,” said Gila Milstein. “Since Magen David Adom is not a government agency, it requires outside funding and volunteers to stay afloat. Our family is deeply committed to supporting this organization’s work, which makes the difference between life and death for countless Israelis.”

“Gila and Adam Milstein tower among our community’s great leaders for their tireless advocacy on behalf of the State of Israel. Their commitment to the Jewish people is remarkable,” said Dina Leeds, Chairman of the American Friends of Magen David Adom’s Western Region. “American Friends of Magen David Adom is privileged to honor these two great humanitarians, whose good work is making an incredible impact, which will go on in perpetuity.”

About the Adam and GIla Milstein Family Foundation: the Milstein Family Foundation works to safeguard and strengthen the Jewish People and the Jewish State by igniting Jewish pride in the next generation, providing pro-Israel Americans with knowledge and expertise to advocate for the State of Israel, and bolstering the critical U.S.- Israel Alliance.

About the IAC: Headquartered in Los Angeles, the IAC is committed to building an engaged and united Israeli-American community that strengthens our next generations, the American Jewish community, and the State of Israel. The IAC strives to achieve these goals through programs and events for all ages – and by empowering and supporting a wide array of non-profit organizations within the Israeli-American community.

ABOUT AFMDA: Magen David Adom is Israel’s national ambulance, blood-services, and disaster-relief organization, serving as emergency medical first responders for the state’s more than 8 million people. MDA is also Israel’s representative in the International Federation of Red Cross and Red Crescent Societies. MDA is the only organization mandated by the Israeli government to serve in this role, but it’s not a government agency, so it relies on funding from donors around the world. AFMDA is MDA’s U.S.-based fundraising affiliate, raising more than 80 percent of the charitable dollars MDA receives annually.

CNN Interviews Adam Milstein about Active Philanthropy and his support for the...