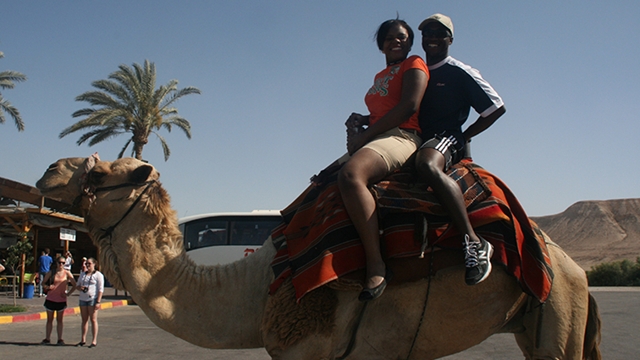 The Adam and Gila Milstein Family Foundation is proud to support AIPAC’s Campus Allies Mission, which brings non-Jewish, pro-Israel political activists to Israel for the first time. Participants learn about the importance of the relationship between the United States and Israel and gain a deeper understanding of Israel’s strategic, social, and security issues, right in the heart of the Holy Land. An alumnus of our Campus Allies — Brett Neilsen — has shared how the Campus Allies Mission has impacted his life. You can read his post below.

In 2007, I was working on my undergraduate degree in Political Science at Utah Valley University, and preparing for my Masters program at Kings College London, when I was invited to join the Campus Allies Mission trip to Israel. Our itinerary included many Christian and Jewish locations I had learned about as a child. We began in Jerusalem, visiting holy places such as the Via Dolorosa, the Church of the Holy Sepulchre, and Gethsemane, the garden at the foot of the Mount of Olives. In the North, we spent time in the Galilee and visiting the Jordan River, Nazareth, Megiddo, and Capernaum. One of the highlights of our trip was a visit to the Western Wall at the Temple Mount, where I had the opportunity to offer a kvital (written prayer) to God and place it in one of the ancient crevices in the Wall. All of these places were as marvelous and sacred as I expected them to be.

However, I was also there to review the political and military situation on the ground, particularly in the Golan Heights, where we took a helicopter tour and met with military leaders. We learned about the region, and the violence that has taken place there before, during, and since 1967. Most memorable was our visit to an IDF base on the border of Lebanon. I recall looking over the military fence and seeing a Hezbollah flag waving in the distance. A few of the soldiers who were hosting us spoke with a familiar accent — they were young Jewish men and women from different parts of America who had come to Israel to fight for their religion, their culture, and the survival of their people. It was an honor to spend a few minutes with them discussing their experiences fighting for the IDF and keeping Israel’s border safe.

We also met with Arab leaders and journalists to get a better understanding of the Palestinian position and situation. We spent time learning about the history of the Arab-Israel conflict, the key players on both sides, and the intricate details of the struggles to find solutions.

On the trip, I learned a great deal about the amazing history, culture, and people of Israel. The economy and technology sectors were vibrant and successful. In the middle of it all was the ever-present reality of the dangers and threats Israel faces on all sides — but a sense of optimism and love of county was everywhere, as evidenced by the national flag displayed on nearly every corner. The most special thing I found while spending time in Israel was that I felt at home.

Subsequent to my time in Israel with the Campus Allies Mission, I studied the Arab-Israel conflict in greater detail during my MA International Relations program at Kings College London. At times, pro-Israel AND pro-American views were unpopular, but I was always happy to exchange views and speak up for my opinions and beliefs. Were it not for my experience spending time in Israel, it’s possible I would have been less inclined to enter the discussion.

My professional life has also blossomed because of my experience in Israel. I have worked for a variety of state and national candidates, and most recently spent time as deputy to Mitt Romney’s national finance committee co-chair during the 2012 campaign. My experiences on the Campus Allies Mission have helped me solidify and ignite my passion for a strong American-Israel relationship, and a secure and robust Israeli economy and defense – and have expanded my appreciation for the miracle that is Israel. I plan to continue my involvement with these important issues far into the future.

Brett Nielsen holds a BA in Political Science from Utah Valley University and an MA in International Relations from Kings College London. He currently works as a partner at Skyrocket Media, a digital marketing firm, serving as the SVP of Strategic Partnerships and Business Development. Most notably, he is a former AIPAC student legislative liaison, winner of the “Activist and Campus of the Year” award at AIPAC, and member of the AIPAC Speakers Bureau.

BDS Ain’t New: The Arab League Boycott Gets a Makeover
Scroll to top